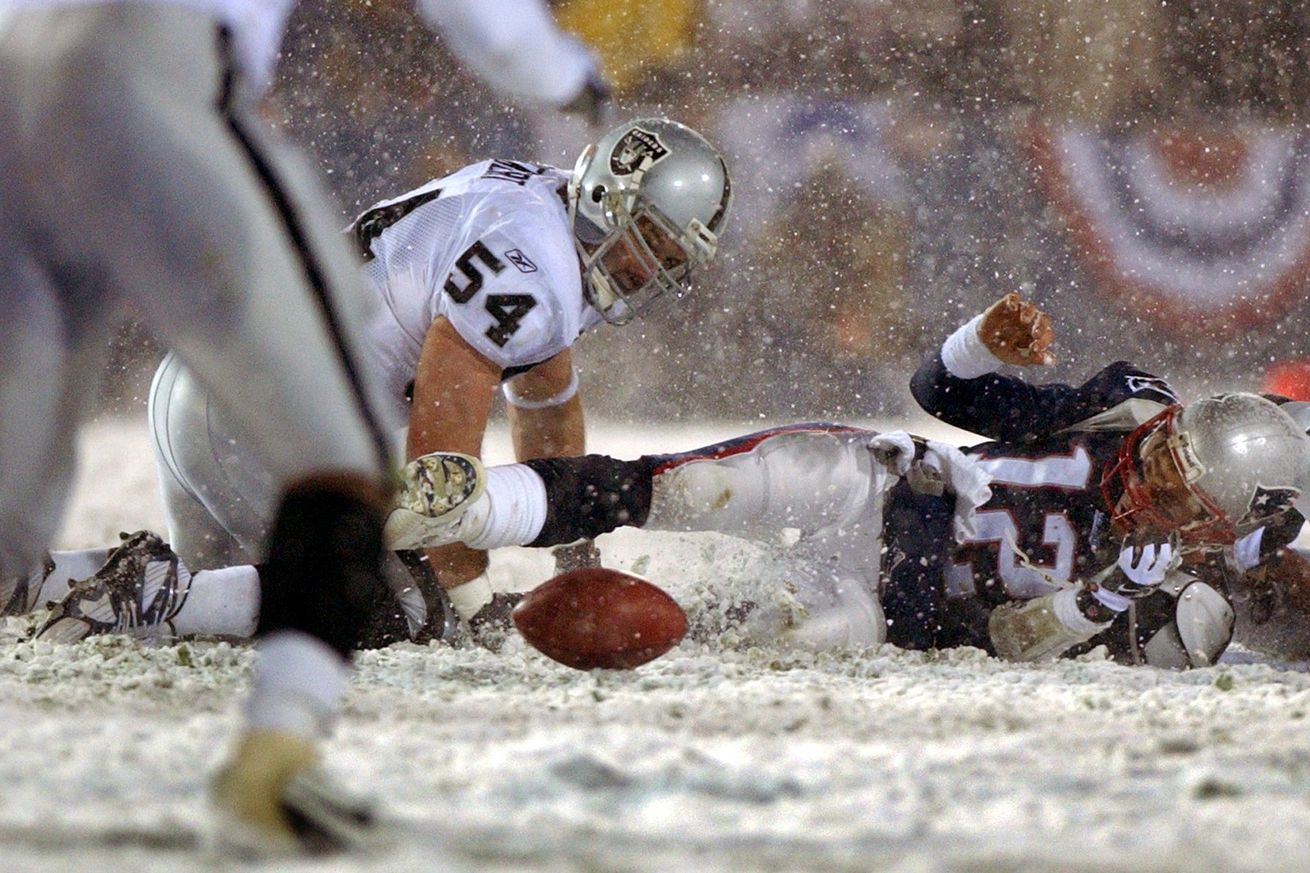 Tom Brady loses the ball after being hit by Charles Woodson during the Jan. 19, 2002, AFC playoff game between the Patriots and Raiders and Oakland’s Greg Biekert (54) prepares to fall on it. Officials reversed the call of fumble to an incomplete pass in what became known as the tuck rule. The Patriots won the game in overtime. | Photo by Jim Davis/The Boston Globe via Getty Images

If the Patriots had lost the infamous Snow Bowl in the 2001 season, a ripple effect would have been felt around the NFL

FOXBOROUGH, Massachusetts (Jan. 19, 2002): Tom Brady’s lost a fumble after being sacked with 1:50 left in the fourth quarter, a play that doomed the New England Patriots and lifted the Oakland Raiders to a 13-10 AFC divisional round win in a game played in a snowstorm.

Brady, a replacement for the injured Drew Bledsoe for the past 14 games of the 2001 season, was hit on a blitz by Charles Woodson, fumbled the ball and it was recovered by Oakland’s Greg Biekert. The officials reviewed the play and upheld the call made on the field. The Raiders ran out the clock and had their biggest playoff win in more than a decade. For the Patriots, it was a quick end to a season that saw them struggle offensively in their only playoff game with Brady.

What if? What if referee Walt Coleman had not reversed the fumble call on the field and injected “Tuck Rule” into the NFL lexicon, to be cursed for 18 years by Raiders fans?

In the short term it would have meant Brady and Bill Belichick were one-and-done in their 2001 season playoff debut and that the Raiders would have played the Steelers for the AFC Championship game.

In the long term? We’ll obviously never know how the NFL would have changed, but in honor’s of SB Nation’s “What If?” Week, I have conjured up various scenarios on the assumption that the Patriots’ loss would have had a domino effect on several teams.

The No Tuck Rule Scenarios That Might Have Been

Patriots:
No Adam Vinatieri playoff or Super Bowl heroics that season. Brady is 0-1 as a playoff starter and Bill Belichick announces an open quarterback competition with Bledsoe the following season. Brady gets the nod, and just like in real life, the Patriots go 9-7 in 2002. Bledsoe gets his job back the following year and Brady is traded two years later when Belichick is fired after not winning a playoff game in his four seasons.

Raiders:
Energized by their exhilarating playoff win in the snow, Oakland stays east and beats the Pittsburgh Steelers in the AFC title game. The Raiders then beat the Rams in the game billed as “Could Have Been an All LA-Super Bowl If They Hadn’t Moved.” Jon Gruden never leaves for Tampa Bay, the Raiders repeat as Super Bowl champs in the 2002 season and Rich Gannon punches his Hall of Fame ticket.

Steelers:
Facing a tired Raiders’ team playing its third straight playoff game, the Steelers cruise to the 2001 AFC championship and beat the Rams in the Super Bowl. Pittsburgh keeps Kordell Stewart at quarterback and passes on Ben Roethlisberger in the 2004 draft. Roethlisberger is instead drafted by the Browns and is out of football three years later, while Stewart never appears on the Real Housewives of Atlanta.

Rams:
Not having to face a defensive game-plan genius in Belichick, the Rams cruise to their second Super Bowl win in three years and the first for coach Mike Martz, who no longer becomes a punchline for underutilizing Marshall Faulk in the biggest game of the year.

Colts:
Belichick’s Patriots become a playoff bystander, never getting over losing to the Raiders in the Snow Bowl. With the AFC theirs for the taking, Indianapolis wins the Super Bowl in 2003, 2004, 2005 and 2006 and Peyton Manning is widely hailed as the G.O.AT.

Buccaneers:
With Gruden staying in Oakland after winning the Super Bowl, Tampa Bay hires the recently fired Jim Mora as their coach in 2002. He delights one and all with another “playoffs?” rant in what becomes an annual tradition before he is fired after three losing seasons.

Lions:
Having just fired Steve Mariucci, the Lions hire an out-of-work Bill Belichick to be their coach in 2006. He trades for former Patriots quarterback Tom Brady, a Michigan alum, who had been riding the bench in Indianapolis as Peyton Manning’s backup. The Lions go on to win two Super Bowls before both Belichick and Brady are banned from the NFL for life for cheating.

Jim Buzinski is co-founder of Outsports.com.