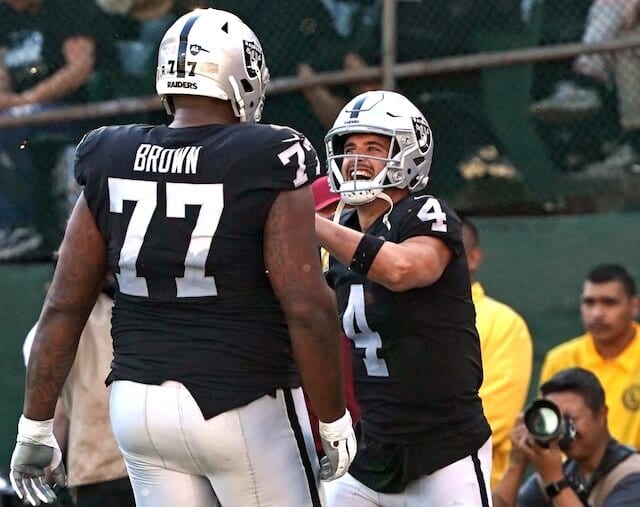 Since Jon Gruden took over as head coach of the Las Vegas Raiders, a big priority has been overhauling the offense, so much so that Derek Carr, Rodney Hudson and Gabe Jackson are the only starters that remain from the pre-Gruden era.

The last couple of years the focus was on the offensive line and running game, drafting both Kolton Miller and Josh Jacobs in the first round as well as signing veteran Richie Incognito and making Trent Brown the highest-paid offensive lineman in football.

After the receiving corps struggled in 2019, the focus this offseason shifted to improving the passing game, drafting Henry Ruggs III in the first round and Bryan Edwards in the third in addition to signing Nelson Agholor and Jason Witten.

Carr will have a lot more weapons to work with in 2020, meaning the Raiders could have one of the most-improved offenses in the league in Gruden’s third season.

Brown believes that will be the case, stating that the Raiders’ offense will be scary for years to come, via Anthony Galaviz of the Fresno Bee:

“I feel like we definitely got better this year,” he said. “We took strides last year and we’re going to continue to take strides and just put one foot in front of the other.

“Even with the additions last year, me being one of them, you can look at those guys and trust the organization … to put the right players in place for us to win some games and win championships. With Henry Ruggs, and we still got one of the best backs in the league and we got the best offensive line in the league. I mean, it’s about to be scary.

“I’m excited. I definitely think it’s going to be special times in silver and black for years to come.”

Brown was arguably the best right tackle in football in his first season with the Raiders, allowing just one sack in 11 games.

If the Raiders offensive line can continue its dominance in 2020 then Jacobs should have another spectacular season, opening up the passing game for Carr and his weapons even more.

Expectations are clearly high for this Raiders offense going into this season, so now it will be up to them to go out and perform in what should be a tough AFC West division.

The post Trent Brown Believes Raiders Offense Can Be ‘Scary’ For Years To Come appeared first on Raiders Newswire.