Wednesday, we took a look at how the 2022 offseason changed the HC landscape. While 10 new sideline leaders are in place for 2022, not quite as much turnover transpired on the general manager front. Five new decision-makers, however, have moved to the top of teams’ front office hierarchies over the past six months. 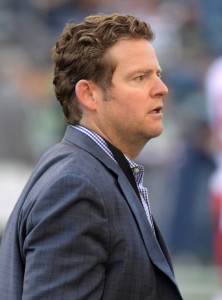 The Bears, Giants, Raiders and Vikings rebooted their entire operations, hiring new HC-GM combos. The Minnesota move bumped out one of the previous top-10 longest-tenured GMs, with 16-year Vikings exec Rick Spielman no longer in power in the Twin Cities. The Steelers’ shakeup took the NFL’s longest-tenured pure GM out of the mix. Kevin Colbert was with the Steelers since 2000, and although he is still expected to remain with the team in a reduced capacity, the 22-year decision-maker stepped down shortly after Ben Roethlisberger wrapped his career.

Twelve teams have now hired a new GM in the past two offseasons, though a bit more staying power exists here compared to the HC ranks. Two GMs (the Cardinals’ Steve Keim and Chargers’ Tom Telesco) have begun their 10th years at the helms of their respective front offices. They have hired three HCs apiece. The Buccaneers’ Jason Licht is closing in on a decade in power in Tampa Bay; Licht will now work with his fourth HC in Todd Bowles. Beyond that, a bit of a gap exists. But a handful of other executives have been in power for at least five seasons.

Here is how long every GM or de facto GM has been in place with his respective franchise: