Kyle Emanuel‘s NFL comeback is taking another step in the right direction. The Texans have signed the veteran linebacker off the Raiders’ practice squad, Aaron Wilson of the Houston Chronicle tweets. 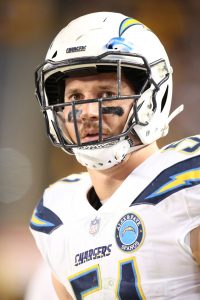 A fifth-round pick of the Chargers back in 2015, Emanuel quickly became a starter. From 2016-18 he started 29 games, but at the conclusion of his rookie contract he surprisingly opted to retire despite reportedly having multiple contract offers on the table. After sitting out the 2019 season, he announced his intention to return to the league back in March.

Obviously COVID-19 threw a bit of a wrench into his plans, and he ended up having to wait until late August to sign with Las Vegas. He was elevated to the active roster for Week 3 but has mostly been on Jon Gruden’s practice squad until now. 29 now, Emanuel will hope to revamp his career with a struggling Houston defense.