With J.K. Dobbins out for the season, the Ravens tried to claim Royce Freeman (Twitter link via Adam Schefter of ESPN.com). Ditto for the Raiders, Yates hears, but the Panthers ultimately nabbed Freeman on Thursday thanks to their higher waiver priority. 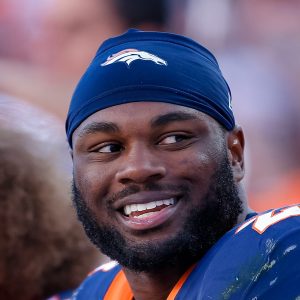 For the Ravens, it’s a sign that they’re not entirely confident in their current options. For now, their RB group consists of Gus Edwards with support from third-year scat-back Justice Hill and 2020 UDFA Ty’Son Williams. It’s possible that Williams would have been let go if Freeman was claimed, despite his strong summer. Edwards profiles as the team’s RB1 for now and his 5.2 career ypc shows that he can do damage. Still, he’s never carried an RB1 workload before.

The Raiders — the Ravens’ Week 1 opponent — would have slotted Freeman behind Josh Jacobs and newcomer Kenyan Drake. That role was ticketed for Jalen Richard, but he’ll start the year on IR thanks to a foot injury.

Instead of Baltimore or Vegas, Freeman will head to Carolina. He’ll slot behind Christian McCaffrey and rookie Chuba Hubbard as he takes Trenton Cannon‘s place on the team. Freeman wasn’t much of a factor last year, but he has 297 career carries to his credit for 1,187 yards and eight touchdowns.