The Raiders will cut quarterback DeShone Kizer, according to Field Yates of ESPN.com (on Twitter). With that, Kizer will hit the waiver wire, where the Bengals hold the top priority. 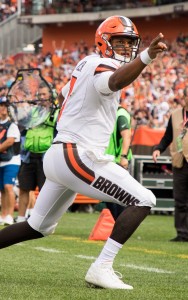 A second-round selection in 2017, Kizer was pegged as a green talent that had high upside. Unfortunately for him, he was taken by the Browns, who proceeded to lose every game that season. At year’s end, he was shipped to Green Bay. Last year, the Packers dropped him before the final cut to 53, leading him to the Raiders. Unless he circles back to the Packers or Browns, he’ll join the fourth team of his NFL career.

Kizer is still only 24, but Jon Gruden & Co. didn’t see a place for him on the roster with Derek Carr, Marcus Mariota, and Nathan Peterman already in the QB room. Mariota, who joined on a two-year, $17.6MM deal, will be one freak or blown play away from taking the field in Las Vegas. Peterman, who was retained with a $2MM+ tender as a restricted free agent, figures to be the QB3.

Kizer has made 18 appearances over the course of his NFL career, most of which came during the Browns’ winless season. All in all, he’s got eleven touchdowns against 24 interceptions.