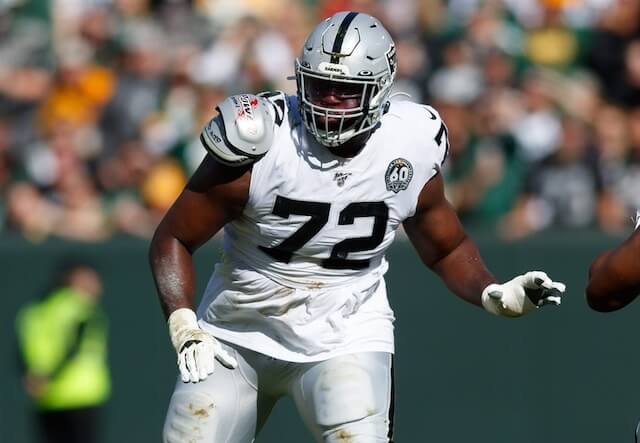 The Las Vegas Raiders announced that they traded offensive lineman David Sharpe and a 2021 seventh-round pick to the Washington Football Team for a 2021 sixth-round pick.

Sharpe originally was a fourth-round draft pick of the Raiders in 2017 out of Florida. Washington defensive coordinator Jack Del Rio was the Raiders’ head coach at the time, so this trade will serve as a reunion for them.

In two separate stints with the Raiders, Sharpe played a total of 22 games starting four of them. Included in that are nine games and two starts in 2019 as he served as valuable offensive line depth when Trent Brown and Gabe Jackson both missed time due to injury.

He was tendered a contract as a restricted free agent this offseason and will make $2.133 million in 2020.

The Raiders added some other offensive line depth this offseason though, especially Sam Young, who has been making an impression so far in camp and seems to have the first backup tackle spot locked down, which made Sharpe expendable for Las Vegas.

With the Raiders needing to soon make their final roster cuts, Sharpe likely would have been one of those players, so it is definitely positive that they were able to upgrade their seventh-round pick in 2021 to a sixth-rounder instead of losing him for nothing.

The Raiders began making those roster cuts this week, waiving or releasing a handful of players while also placing Tyrell Williams on injured reserve.