The Raiders have agreed to sign Devontae Booker, according to Sean Cunningham of ABC 10 (Twitter link). On Thursday morning, the deal was also confirmed by NFL.com’s Ian Rapoport (on Twitter). 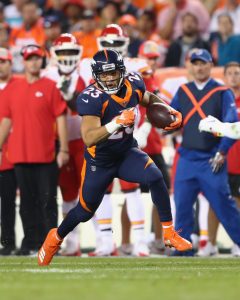 Booker, formerly of the Broncos, will look to stick as a backup to Josh Jacobs. The Raiders also have third-round rookie Lynn Bowden on hand, so there are no more than two spots up for grabs on their RB depth chart. Jalen Richard and Rod Smith are also vying for their spots.

Booker was drafted in the fourth-round of the 2016 draft and went on to have an inconsistent run with the Broncos. As a rookie, he started in six games and finished out with 31 catches and 877 all-purpose yards. After that, he continued to play a role on passing downs, but his workload fluctuated over time and his carries dwindled. Last year, Booker suited up for all 16 games, but finished out with just two totes and six catches.By comparison, he had 105 catches and 289 carries from 2016-2018.