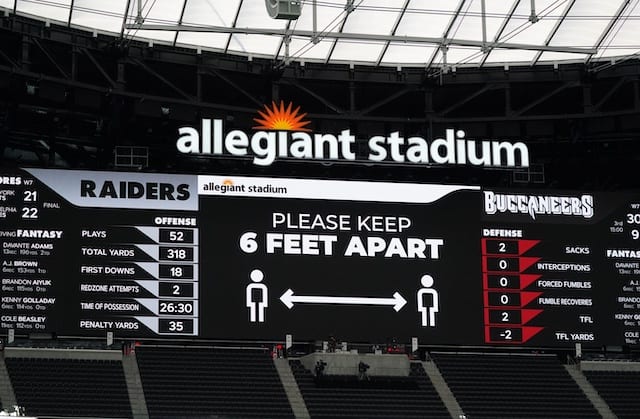 The Las Vegas Raiders are preparing for their biggest game of the 2020 NFL season up to this point with the Kansas City Chiefs coming to town for Sunday Night Football in Week 11.

The Raiders find themselves in a solid position to close the gap between them and the Chiefs for AFC West supremacy. Unfortunately, they have largely been hamstrung by injuries and multiple setbacks with coronavirus (COVID-19).

Offensive tackle Trent Brown and linebacker Cory Littleton were already on the Reserve/COVID list to begin Week 11. They were then followed by more key starters in defensive end Clelin Ferrell and cornerback Lamarcus Joyner.

The Raiders have now placed seven more players on this list heading into the matchup versus Kansas City. Despite that, according to ESPN NFL Insider Adam Schefter, the game will continue as scheduled this Sunday as of now:

With Las Vegas placing seven players on Reserve/COVID list today, there’s no change to status of Sunday night’s Raiders-Chiefs game. Those high-risk, close-contact players in quarantine will be eligible to participate in the game provided they continue to test negative.

The moves come in response to the recent memo that was sent out to all 32 teams by the NFL stating that the league would be ramping up their protocol for the remainder of the season. It is no secret that the Raiders have been one of the most habitual violators of COVID rules this year and it has cost them over $1.2 million in fines along with a 2021 sixth-round draft pick.

Although Ferrell has likely been ruled out for Sunday, the six other players can still be eligible to take part should they continue to produce negative tests. It is safe to say that the last thing Las Vegas needs right now is to lose any more key starters due to a lack of precautions, especially with a big matchup against the Chiefs on the horizon.