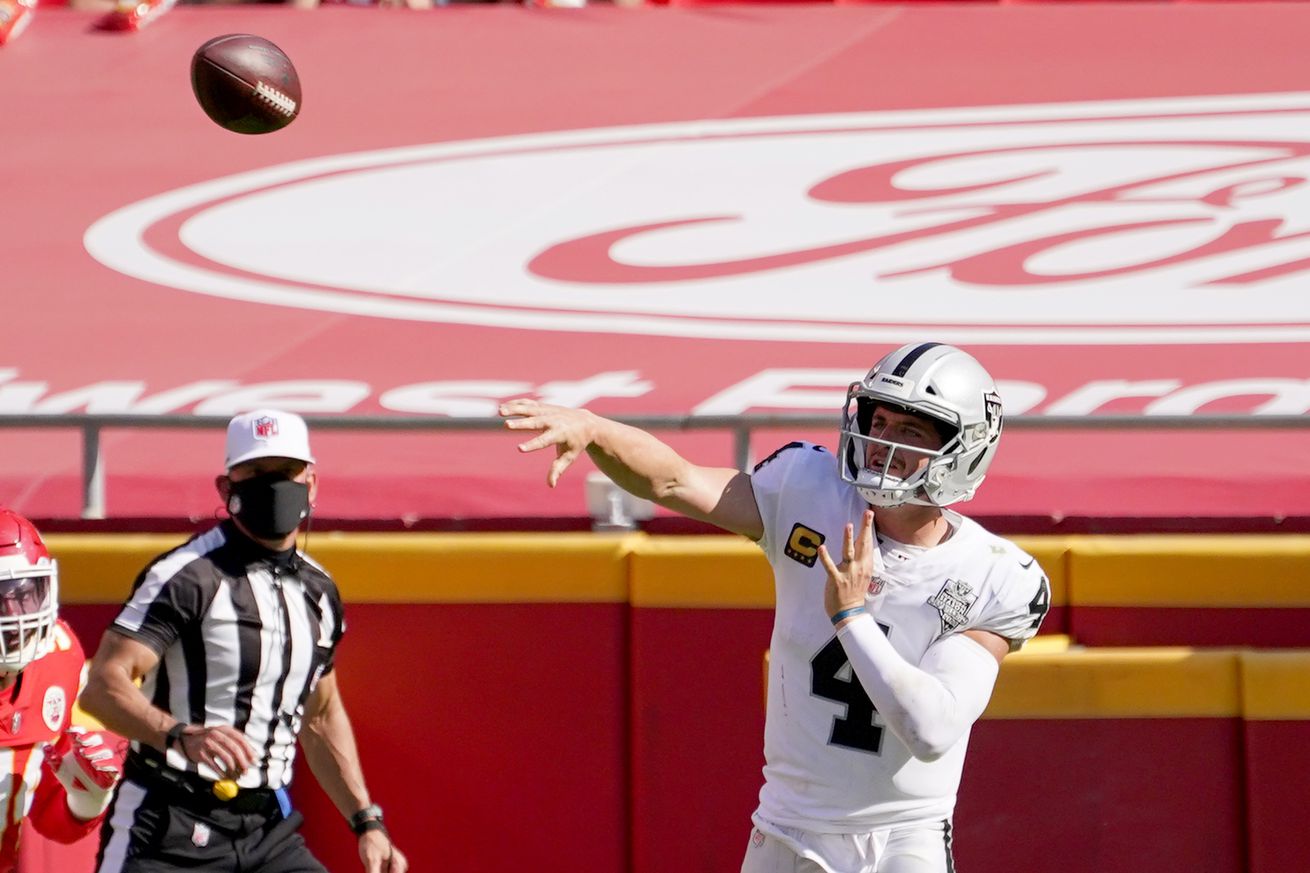 Las Vegas is averaging 36 points per game with Henry Ruggs

With nothing to lose or gain, I’ve mentioned several times recently that Derek Carr couldn’t get away with simply being “good” this season. Though Carr had been completing 73-percent of his passes and had yet to throw an interception, what good was it if the Raiders weren’t scoring touchdowns in the red zone, keeping pace on the scoreboard and proving to have a deep passing threat? Las Vegas doesn’t need Carr to be better than previous versions of himself, he needs to be better with current versions of the AFC’s top passers.

On Sunday against the NFL’s top passer, Derek Carr answered the call.

I’ve prefaced all 2020 quarterback stats with caution because realistically the bar has been raised. However, Carr’s performance against the Chiefs was unmistakable with regards to his final stats:

22 of 31, 347 yards, three touchdowns and one interception. Let’s watch the interception to be “objective” and then move the hell on.

Carr’s 11.2 yards per pass attempt was a career-high, which puts this performance into a much better perspective than simply comparing it to his most three or four recent games. Carr has played 98 times before Sunday and not once did he average 11 yards per pass attempt. He has hit the 10 Y/A mark four times.

But two of those games came in 2019 under Jon Gruden and now he’s had, not conservatively speaking, the best game of his pro career. Much like the popular MVP candidates around the league today, it came via successful deep passing against a formidable opponent.

Carr had only attempted nine passes over 20 air yards through the team’s first four games, which ranked well outside the top 20. He had completed five of those throws and had one of the higher passer ratings on those plays (138) but it wasn’t a consistent threat and the Raiders only scored 43 points over their last two games.

Were it 1979, when the Steelers led the NFL at 26 points per game, that’d be somewhat encouraging. But the year is 2020 and the only silver lining on a dystopian present is deep touchdowns, baby.

Gruden had high hopes for Ruggs and the Raiders have scored 34 points, 34 points and 40 points during his three starts. Perhaps this was a blind spot in my evaluation of Carr, to not give the team enough credit for the plan with Ruggs and also how much better they had played with Ruggs.

“We didn’t bring him in here to run hitch routes.” – #Raiders Jon Gruden, on @__RUGGS

After attempting an average of barely two deep passes per game (according to one outlet), Carr went three of five for 177 yards and one touchdown, plus a 19-yard defensive pass interference penalty tacked on — in the first half.

That included this 59-yard deep middle strike to Nelson Agholor.

And 72 more yards to Ruggs.

YOU CANNOT KEEP UP WITH HENRY RUGGS.

With the Raiders defense holding the Chiefs to punts on their first three drives of the second half and then re-taking the lead, Las Vegas didn’t need Carr to take those same shots as often. But when he did, Carr again found success, this time connecting with Hunter Renfrow for 42 yards.

The return of Ruggs didn’t only open up Ruggs for more opportunities, it also revealed that the Raiders have several other deep threats who are ready to be collectively compared with the team they just beat quite convincingly.

Jon Gruden on his QB’s performance “I wouldn’t question one thing about Derek Carr. He is giving you everything he’s got. He’s performing pretty darn good.” #Raiders

Gruden even noted after the game that “Pro Football Focus statisticians” would be mystified by Sunday’s numbers, which will be pleasing to both bored PFF statisticians and Cris Collinsworth. And I’m sure he is correct.

Gruden: “We threw the ball down the field. Some of the Pro Football Focus statisticians will have to scratch their head.”

Last week, I noted that whether it was Derek Carr or somebody else, eventually the Raiders would have to attempt to become a more dangerous deep passing offense at some point. It turned out it can be Carr. Even with Ruggs in the first two games, there was no evidence that Sunday’s monstrosity of passing offense was going to unfold as it did against one of the NFL’s better pass defenses through four weeks. How often can you say that something unprecedented has happened in 2020?

I’ve never read the news before, but I’m going to say “Not often.”