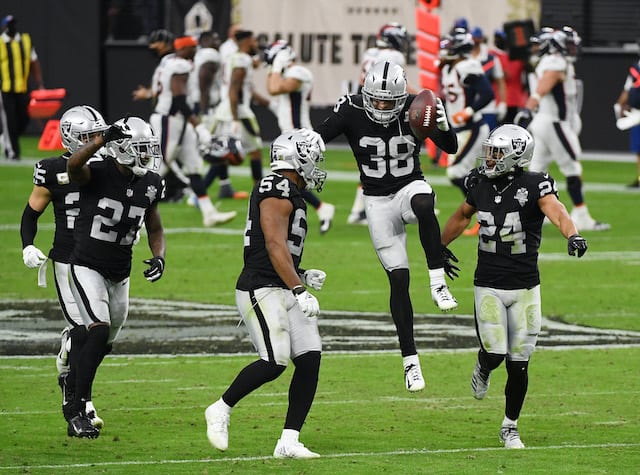 Las Vegas Raiders safety Jeff Heath was an instrumental part of the team’s 37-12 blowout win over the Denver Broncos in Week 10 and was rewarded for his efforts by being named the AFC’s Defensive Player of the Week.

Heath was an absolute ball hawk in the massive divisional win, grabbing two interceptions of quarterback Drew Lock. This game alone tripled Heath’s interception total on the year, going from one to three.

His 42 interception return yards helped to give the Raiders good field position, where they proceeded to absolutely dominate on the ground. For the day, the Raiders ran for 204 yards and four touchdowns.

Heath has been somewhat underwhelming for the Raiders this season in his backup role, but the two picks on Sunday allowed Heath to tie his career high for interceptions a single season with three.

He also had two pass deflections in addition to the interceptions in what was a forgettable performance from Lock, who had promise and hype surrounding him entering the season but was abysmal on Sunday. In total, he was 23-for-47 for 257 yards with one touchdown and four interceptions. Two came from Heath while the other two came from Nick Kwiatkoski and Carl Nassib.

Heath led the Raiders to the team’s best defensive performance of the season. Hopefully they can bring that momentum into their big Week 11 matchup against the Kansas City Chiefs.

While it would be very easy to take some credit for a good defensive performance with two interceptions, Heath did not want it, instead giving it all to the Raiders coaching staff.

He cited their game plan and preparation that allowed them to be in the right places at the right times. Meanwhile, head coach Jon Gruden was complementary for Heath for playing well while not being at 100%.