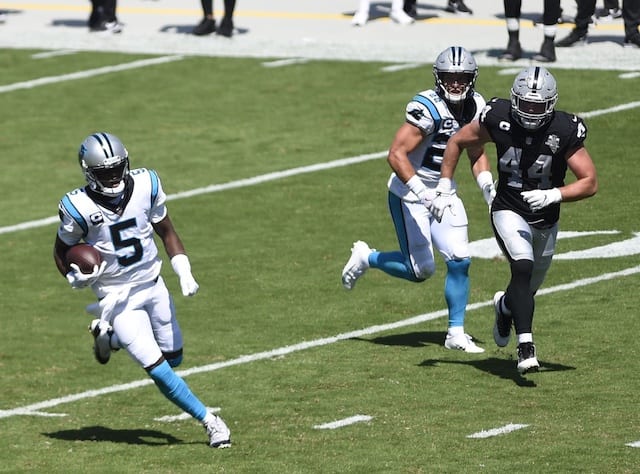 One of the biggest priorities of the Las Vegas Raiders’ this season was strengthening their linebacking corps after years of poor production at the position.

They did so by signing Nick Kwiatkoski and Cory Littleton, two veterans with a ton of experience that could come in and be starters right away.

Kwiatkoski, in particular, made a strong impression on his new teammates in training camp as he was named a captain and shot-caller for the defense.

Unfortunately though, he was forced to leave the team’s Week 1 game against the Carolina Panthers after being diagnosed with a pectoral injury. While further testing was required, the original sentiment was it could be a serious injury for Kwiatkoski.

Now that a day has gone by though and he underwent an MRI, it seems that the organization is much more optimistic that he avoided serious injury, per Ian Rapoport of NFL Network:

#Raiders LB Nick Kwiatkoski did not suffer a torn pec yesterday, source said, with the MRI confirming the initial diagnosis. While he still could miss time, it’s not nearly as severe as it appeared. The team is still determining his timeline.

Raiders head coach Jon Gruden did not yet have an update on Monday on the status of Kwiatkoski or any of the other players thay got injured, via Tashan Reed of The Athletic:

#Raiders HC Jon Gruden said the team is still waiting results from the trainers, so there’s no update on the status of players such as Trent Brown, Sam Young and Nick Kwiatkoski.

While Kwiatkoski was out, Nicholas Morrow saw a majority of the time at linebacker in his place, playing 46 snaps compared to only six for the recently-acquired Raekwon McMillan.

So even though Kwiatkoski may have avoided serious injury, it seems that he still could likely miss the next few games, which would mean that Morrow and McMillan would continue to see action in his absence.

Luckily for the Raiders, Littleton was as good as advertised in the win over the Panthers, recording five tackles and a pass defensed. Safeties Johnathan Abram also did a nice job of stepping up into the box, leading the team with 13 total tackles so they should be able to manage until Kwiatkoski is healthy.