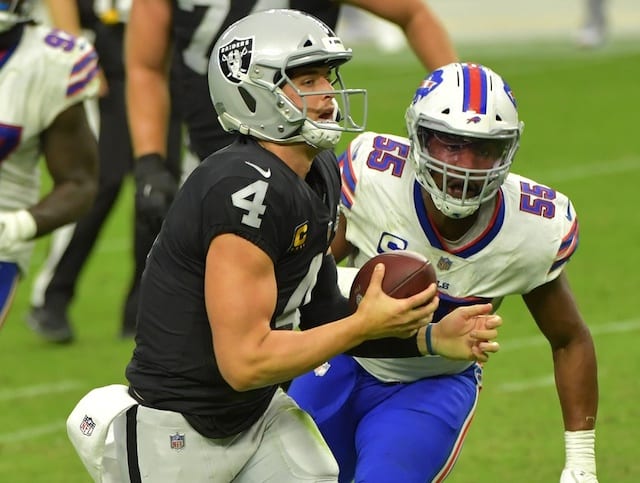 I’m trying to remember how many different times I assumed Sunday’s game was over between the Las Vegas Raiders and the Buffalo Bills. The first was when the Bills went up 14-3 on their second drive of the game — having gained 150 yards on 19 plays with almost no resistance. The second was when they went up 30-16 early in the fourth quarter following a costly Darren Waller fumble. And the third was when the Raiders failed to recover an onside kick at the end of the game.

Of course, credit to the Raiders for proving me wrong after the first and second “give-up”, but in the end, they just didn’t do enough to win this one against the still-undefeated Bills.

What’s fascinating is that if you looked only at the box score, you might have a different guess of how this game played out. The Raiders had the ball longer (32 minutes), had fewer penalty yards, more first downs, a better third-down percentage and more total yards. The one category they lost handily?

In reality, that was the only true difference in this one. On three consecutive drives in the second half, the Raiders went fumble/turnover-on-downs/fumble — a stretch that started with the Raiders holding the ball down just seven points. By the end, they were down two touchdowns with less than six minutes left and it was a case of too little, too late.

Now standing at 2-2, the Raiders still remain in the thick of the playoff conversation (although, admittedly, it’s about two months too early to be talking about the playoffs) with one game remaining on their opening-season gauntlet (a trip to Kansas City on Sunday). After that, they’ll get their bye week and hope they can get healthy for the 11-game stretch to end the season. I’d imagine they’ll need at least seven wins to return to the playoffs.

It’s weird to say that nobody deserves this spot given the 23 points scored and 383 yards gained, but the only two guys who could have earned it (Derek Carr and Darren Waller) were the two main culprits in the turnover category. Carr was good but not great on Sunday (32/44 for 311 yards and 2 touchdowns), while Waller could be described the same (9 catches, 88 yards) — but neither could make the big play (or avoid the terrible one) when the team needed it.

Really this award probably belongs to Daniel Carlson, who was 3/3 on field goals (including a 54-yarder) and 2/2 on extra points. He remains a bright spot this season and one of the better kickers in the league thus far. Honorable mention to punter AJ Cole, who hasn’t received much playing time this season, but he did boom a 57-yarder in his one chance Sunday.

The guy only had three tackles, but his presence alone earns him this award. Coming into the game, the Bills were averaging over 100 yards per game on the ground, while the Raiders were allowing over 160 — with most of that damage down in Kwiatkoski’s absence. On Sunday, the Bills ran for just 62 yards on 24 carries (2.6 YPC) — helping me nail my prediction of less than 90 rushing yards allowed.

Unfortunately, the rest of the defense was an absolute embarrassment — specifically in the defensive backfield. Yes, the Raiders are banged up, but Josh Allen threw only 10 incompletions on Sunday, and I’d wager at least half of those were either drops or throw-aways. The Raiders finished Sunday with zero pass breakups from someone other than a defensive lineman. On 34 attempts, that’s astonishing.