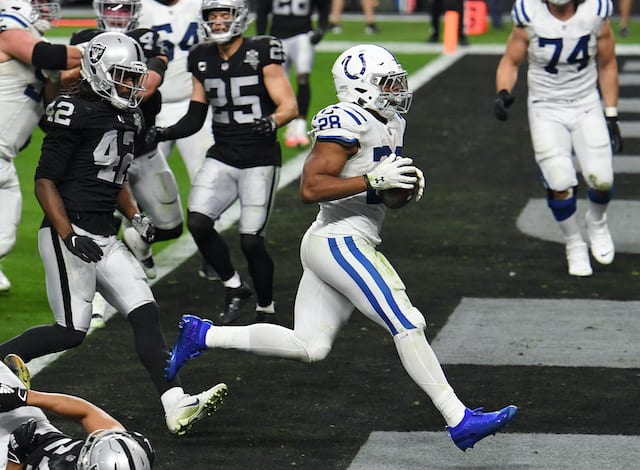 The loss to the Atlanta Falcons could be explained as a fluke. The New York Jets’ game ultimately ended in a win. In a weird way, it seemed like everything was setting up perfectly for Sunday’s matchup with the Indianapolis Colts: the Las Vegas Raiders were at home, and their playoff hopes remained firmly within their control. They had been warned two weeks in a row about what would happen if they didn’t show up — and so surely it wouldn’t happen again, right?

With a chance to move into the No. 6 seed in the AFC, the Raiders instead laid another egg, playing so poorly that their defensive coordinator Paul Guenther didn’t even survive the night with his job intact. The Colts gained 25 first downs — five via penalty — and 18 of which came in the first half when the game was still in the balance. They gained 456 yards — 212 of them on the ground — and then added another touchdown on defense.

Most damning of all: the Colts moved into Raider territory on every single drive, scoring on seven of their eight attempts. Put simply: the Raider defense was impotent when their team needed them most.

This isn’t to say the offense was perfect — because they weren’t. Their day started with a three-and-out and included an interception (albeit an amazing one) in the endzone — not to mention the pick-six that went through Jalen Richard’s hands at the end of the game.

At the end of the day, the Raiders remain on the outside looking in when it comes to the playoffs — still a game behind the Dolphins for the final spot. If the Baltimore Ravens lose Monday Night to the Cleveland Browns, then the Raiders still control their own destiny by virtue of their upcoming matchup with Miami. But even that seems like wishful thinking based on what we have seen over the past three weeks.

While not wanting to go fully pessimistic, this week’s awards will be a mix of MVP’s and LVP’s…

The box score is a bit misleading in that one of the interceptions wasn’t his fault, while a number of his yards came on check-downs against a prevent defense. Either way, Carr was good enough to win on Sunday — not amazing, but good enough. He had some drops that plagued him, and the first interception was slightly underthrown, but at the end of the day I felt bad for Carr as the game wound down: here’s a guy whose defense never gave him a chance. That has to suck.

Two plays of note: when the Raiders were down 10-7 in the first, Carr had two passes to Nelson Agholor that show how much he has grown. The first was a deep ball down the right side which netted 36 yards. On the play, Carr moved the safety to the left, then came back and dropped a dime. Four plays later, Carr found Agholor across the middle and he placed a strike right on the money for a 21-yard touchdown. Two separate plays, two very different throws, both perfectly executed.

Morrow is a guy I’ve made fun of a lot, but he has proven me dead wrong of late. By all accounts, this dude is a bonafide NFL starter, and Sunday’s performance was yet another reminder as he finished with eight tackles, two tackles for a loss and two pass deflections. Meanwhile, Hankins’ impact rarely shows up in the box score, but he was perpetually in the backfield on a day when the Raiders couldn’t stop anything rushing-wise. He has been really good this year, but the poor linebacking play behind him hasn’t helped.

I have to apologize to anyone who follows me on Twitter because you’re probably sick of me talking about Abram, but I can’t get over how big the gap is between the game he talks and the game he plays. Like, seriously, if not for the oversized personality and occasional loud tackle, would we even be talking about this guy as anything but a catastrophic bust?

On Sunday, per PFF, he was targeted three times, allowing three catches for 72 yards and a touchdown. That’s a passer rating of 158.3 (or, perfect). That also doesn’t include the idiotic personal foul he committed on a Colts touchdown drive or all the times he was woefully out of position against the run (or when Jonathan Taylor ran right past him for a 62-yard touchdown). Rough.

Lawson was just as bad. Again, per PFF: targeted five times, allowing three completions for 48 yards and a touchdown. At some point, I wonder how bad the guys behind him must really be.