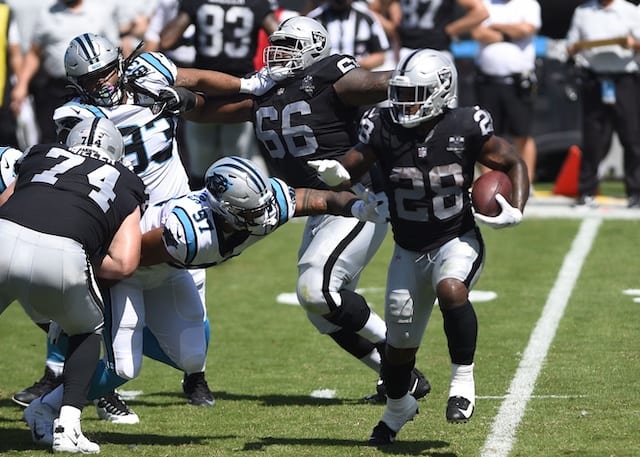 How in the world are you supposed to prepare for a team with a brand new coaching staff (who are all new to the NFL), a brand new quarterback and a defense that was bolstered by an entire draft crop of defensive players?

For Jon Gruden, he joked that it was like exchanging high school football tape with coaches from across town as his staff watched a lot of Baylor (where Carolina Panthers’ head coach Matt Rhule was last year) and LSU (where offensive coordinator Joe Brady was last year). Fortunately, whatever they found on that tape appeared to be juuuuuuust enough to get the Las Vegas Raiders a win in Carolina in the 2020 season opener.

In the end, the Raiders came away with a 34-30 win (which is about as close as I’ll ever get to predicting a score correctly) despite playing the vaunted east coast morning road game to start their season. The game was a total back-and-forth affair, as it featured seven different lead changes — which the broadcast noted would have tied for the most lead changes in a game all of last season.

The game started with a Raiders three-and-out (which at least featured a deep shot for Henry Ruggs III on the second play of the game) and then a Panthers drive that ended in a field goal. The teams proceeded to trade touchdowns and then field goals before a Nelson Agholor touchdown put the Raiders up 17-12 with two minutes left in the first half.

In the third quarter, the Raiders defense made some adjustments and buckled down — forcing a pair of three-and-outs while the offense tacked on 10 more points to open up a 27-15 lead (their biggest of the game). Unfortunately, it seemed like the Raiders may have gotten a bit too comfortable heading into the fourth, as the Panthers put together two drives that ate up 152 yards and resulted in two touchdowns to move ahead 30-27.

The Raiders regained possession with just under nine minutes left in the game, and the offense did exactly what it needed to: they ate up more than four minutes of game clock while marching down the field on a nine-play, 75-yard touchdown drive. With the defense back on the field, the Raiders desperately needed a big play — and they got it when the Panthers tried a fullback dive on fourth-and-one. Defensive end Clelin Ferrell penetrated into the backfield and got to the ballcarrier before he even reached the line of scrimmage, giving the Raiders the ball back and ultimately sealing the win — the first win in the history of the Las Vegas Raiders.

On the game-winning drive, Josh Jacobs was involved in five of the team’s nine plays — including the six-yard touchdown run that gave them the lead. After the game, Gruden compared his running back to Walter Payton, saying that despite the heat Jacobs kept asking for the ball — ultimately rewarding his coach for trusting him.

Jacobs finished with 139 total yards and three touchdowns, but what always strikes me about watching Jacobs is his ability to turn broken plays into positive ones. For many running backs, their greatness is on full display in their highlight plays but for Jacobs, I am perpetually amazed at his ability to meet a tackler at the line of scrimmage and then fall forward for a gain of four. Those are the plays that keep drives alive and keeps the offense on the field, and it’s where he’s ultimately at his best.

Honorable Mention: Derek Carr. 239 passing yards isn’t much to write home about, but Carr was great when he needed to be — including an absolute dime to Nelson Agholor on his only touchdown pass of the day. He finished 22/30 with no turnovers and even pushed the ball downfield in a way that fans have been asking for.

The second-year safety who missed almost all of last season with an injury lived up to his draft status on Sunday, finishing with a team-high 13 tackles. Carr mentioned that in a season without fans, teams are going to need to find ways to motivate themselves and bring the “juice” — something he said Johnathan Abram did on Sunday, punctuated by an absolute stonewalling of Christian McCaffery at one point.

Honorable Mention: Clelin Ferrell. The 2019 first-round-pick has gotten his fair share of criticism, but on Sunday he came up with the biggest play of the game. The Raiders are expecting bigger things from Ferrell this season, and while they insist it may not all show up on the stat sheet, Sunday was a definite step in the right direction.

This week the Raiders get an extra day of prep, as they’re set to open their brand new stadium on Monday Night Football against the New Orleans Saints. Stay tuned later in the week for a preview of that one.