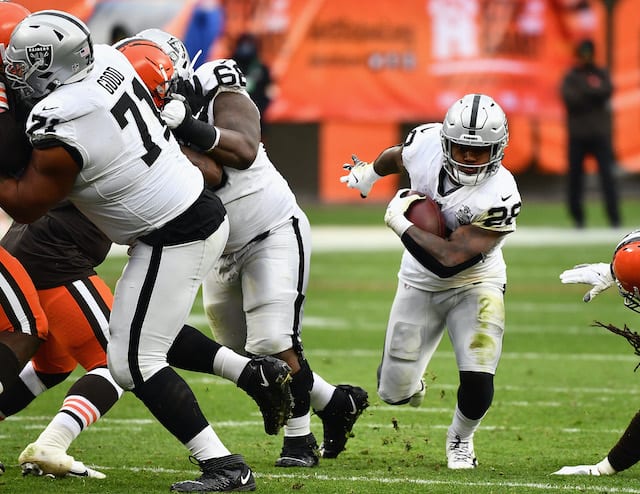 It’s rare to see a betting line move dramatically without an earth-shattering injury, but when the over/under for the Las Vegas Raiders’ game in Cleveland against the Browns on Sunday dropped more than six points, you knew something was up. Turns out it was the weather — and a six point drop was about 20 too few, as winds approaching 40 miles an hour along with snow/sleet/hail/rain combined to make this an ugly football game all around.

The only part that wasn’t ugly? The score, as the Raiders emerged with a 16-6 win to move to 4-3, firmly entrenched in the playoff hunt.

If you wanted a sense of how this game was going to go, the Raiders’ first drive was the perfect snapshot. After Darren Waller dropped what would have been a first down (and more), the Raiders settled for a 41-yard field goal attempt.

For my money, this was the single greatest field goal attempt that didn’t go in. I mean…

The wind in Cleveland is BANANAS pic.twitter.com/SsrmYZ9a1U

Still tied at zero, the Browns took over and got some help from the Raiders — who committed a pair of offside pentalties on the drive. Again, it didn’t matter though, as Nick Kwiatkoski forced a fumble that was recovered by Nicholas Morrow.

After the Raiders went three-and-out, the Browns marched down and kicked a field goal to open the scoring. The Raiders would match them on their next drive, although Henry Ruggs III definitely should have had more as Derek Carr threw a perfect pass to the corner of the endzone, where Ruggs failed to get his feet down on what should have been a pretty ordinary play. After review, it was ruled incomplete (although depending on which angle you look at, maybe he did get his feet down). The Raiders would add one more field goal and take a 6-3 lead into the half.

Much like the Raiders had a potential touchdown go to review, the Browns matched their poor luck on the first drive of the second half as Jarvis Landry dropped a surefire touchdown that was eventually ruled incomplete. They’d settle for a field goal and a 6-6 tie with 8:47 remaining in the third.

This is when the Raiders turned things up a notch.

Carr led the Raiders on a 15-play, 75-yard drive capped off by a Hunter Renfrow touchdown — which very nearly got the same treatment as Landry’s — to give them a 13-6 lead. After a stop that was aided by a big David Njoku drop, the Raiders started pounding the ball with Josh Jacobs on a 13-play, 74-yard drive. Unfortunately with three attempts from the 1-yard line, they couldn’t pound it in though, so they settled for a field goal to make it a two-score game.

On the ensuing drive everything would come full circle as the Browns missed a field goal of their own, giving the Raiders back the ball as they ran out the clock.

A tough 31 carries for 128 yards gets you the MVP award in a game like this, and so I would be remiss not to shout-out Jacobs. This is the type of game Jacobs and the Raiders love — pound, pound, pound as they run out the clock, and that mission was accomplished.

But aside from Jacobs, I want to give a shout-out to Devonte Booker as well. His box score is rather pedestrian (six touches, 46 yards) — but he always seemed to come up with a big play when it was needed. On the Raiders’ first scoring drive, Booker caught his only pass of the game on third-and 18 — going for 17 yards — and extending the drive after Alec Ingold converted on fourth down.

The other key play was on the Raiders’ final drive when Carr scrambled for 18 yards but fumbled before going down. Booker pounced on the ball, preserving the drive and allowing the Raiders to put the game out of reach. For that, Booker gets my co-MVP.

This isn’t meant to be disrespectful, but anyone who wants to pretend like the Raider defense figured anything out this week is fooling themselves. The Raiders got bailed out by a number of key drops — and by weather that forced the Browns into being one-dimensional. The Raider pass rush generated zero pressure, but were able to be stout against the run when they needed it. In the end, both teams had to deal with the wind — and the Raider offense made more plays when they needed it.

Okay, okay, okay, so I need to get over the miss, but MAN that was a good kick all things considered. Going four-for-four on kicks the rest of the day is a testament to his confidence and determination.