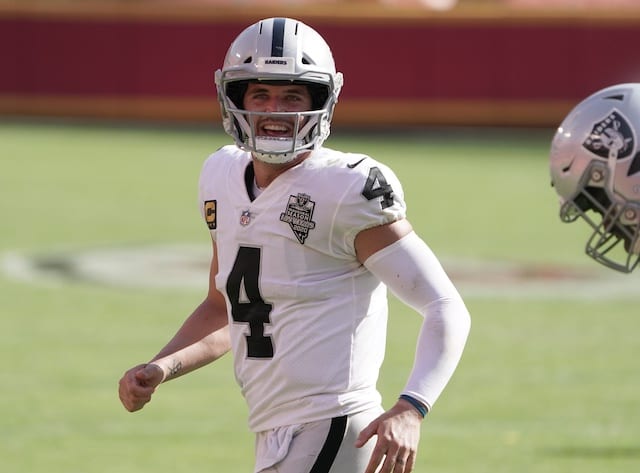 Can you believe the NFL season is only five weeks old? I mean, think about life as a Las Vegas Raiders fan thus far…

There was the nail-biter in Carolina and then the Monday Night stunner against the New Orleans Saints. The Raiders were 2-0! Then the dud against the New England Patriots and sloppiness against the Buffalo Bills. 2-2. And then…oh great…here come the Kansas City Chiefs. No, wait, we had to go to them.

Coming off two straight losses? Missing two of our best defensive linemen and still without our No. 2 corner? Against Patrick freaking Mahomes?

40 points later all of those questions and concerns faded away as the Raiders did the unthinkable: they went blow-for-blow with the best offense in football in the first half, and then stymied it in the second half to walk away with another marquee win for Jon Gruden. So here’s how it all went down…

After winning the coin toss and deferring, the Raiders opted to put the ball in Kansas City’s hands to start — even getting a stop thanks to a holding penalty that wiped out a 58-yard touchdown pass. The Raiders responded with an 11-play, 75-yard drive of their own — but they only got three.

This was the first of a handful of fourth-down decisions for Gruden, but for me, this one was the easiest. Yes, you figured you would need touchdowns and not field goals in this game — but on the first drive and facing a fourth-and-six, this was a no-brainer.

The Chiefs would respond with an immediate touchdown thanks to a pair of big catches from Travis Kelce — who burned Johnathan Abram and then Cory Littleton for big first downs — before Mahomes ran it in himself to give Kansas City the lead.

On the ensuing possession, the Raiders found themselves facing third-and-one, when Carr saw Darren Waller open on a crossing route, but overthrew him for his first interception of the year (and first in his last 316 pass attempts). The Chiefs would need just four plays to extend their lead to 14-3.

For me, this was the biggest moment of the game. It felt over. I mean, the Raiders didn’t really have a chance in this game, right? And the Chiefs — while not scoring on their first drive — had moved unhindered on the last two. As for the Raiders? They marched down on their first drive, sure, but couldn’t get a touchdown. How, exactly, where they going to make up a double-digit deficit in this one?

After three runs and a short catch for Devontae Booker, Carr found Nelson Agholor open for a 59-yard touchdown pass. 14-10 and this game was on.

Unfazed, the Chiefs responded with a quintessential Patrick Mahomes drive. In the first half the Raiders were mostly good, but whenever there was a hint of a mistake, Mahomes seemed like he could exploit it. Whether it was extending a play for what seemed like forever or throwing backwards across his body, the guy was unbelievable — leading to yet another Chiefs touchdown.

But the Raiders wouldn’t give up. They ended the half on a 14-3 run (thanks in part to a massive drop by the Chiefs on third down, leading to a punt), putting the score at 24-24 with the Raiders getting the ball.

While the first half was all offense, the second half was the opposite. Neither team scored in the third quarter, but the Raiders finished the quarter driving. The drive was bouyed by a pair of big third-down conversions, and then finished off with a fourth-down conversion that led to an eventual touchdown on a Josh Jacobs touchdown run.

After another stop, a Raiders field goal and then an interception of Mahomes (his first of the season), the Raiders punched it in for a two-yard touchdown to go up by 16 points with 5:26 left in the game.

Think about this: in their four second-half drives up until this point, the Chiefs had gained just 40 total yards. No matter how you slice it, that number is astonishing.

The Chiefs would cut the lead in half on a 75-yard drive that included the requisite two-point conversion, but after getting the ensuing kick-off (that was some hybrid of an onside kick and a squib kick), the Raiders were able to run the clock out — aided by another fourth-and-one conversion on a Derek Carr sneak up the middle.

There’s no other competition here as Carr was unbelievable in this one. Aside from the one pick, he was spot-on all day whether it was a short dump off or a deep bomb. He finished 22/31 for 347 yards and three touchdowns — as well as two fourth-and-one conversions via the quarterback sneak. In all honesty, aside from the interception I can’t think of a single pass he really missed — despite needing to move around in the pocket far more than he is used to.

Honorable mention: clearly Trent Brown and Henry Ruggs III matter to this offense. With both back in the lineup, things just looked different, which was a testament in part to these two guys.

This guy gets a lot of flack from Raider fans, but whatever Guenther dialed up in the second half to confuse Mahomes was working. 40 total yards on four drives — including an interception — is an amazing accomplishment, let alone for a defense that has struggled like this one has and that was missing the dudes it was. The big question now is whether or not the Raiders can keep it up after the bye week.

Honorable Mention: the defensive line wasn’t at full strength, but even just rushing three or four guys, they were disrupting the Chiefs offense all game. Maxx Crobsy and Chris Smith had a sack, while Clelin Ferrell and Arden Key flashed at times as well. This was a gut-check for this unit and they delivered.