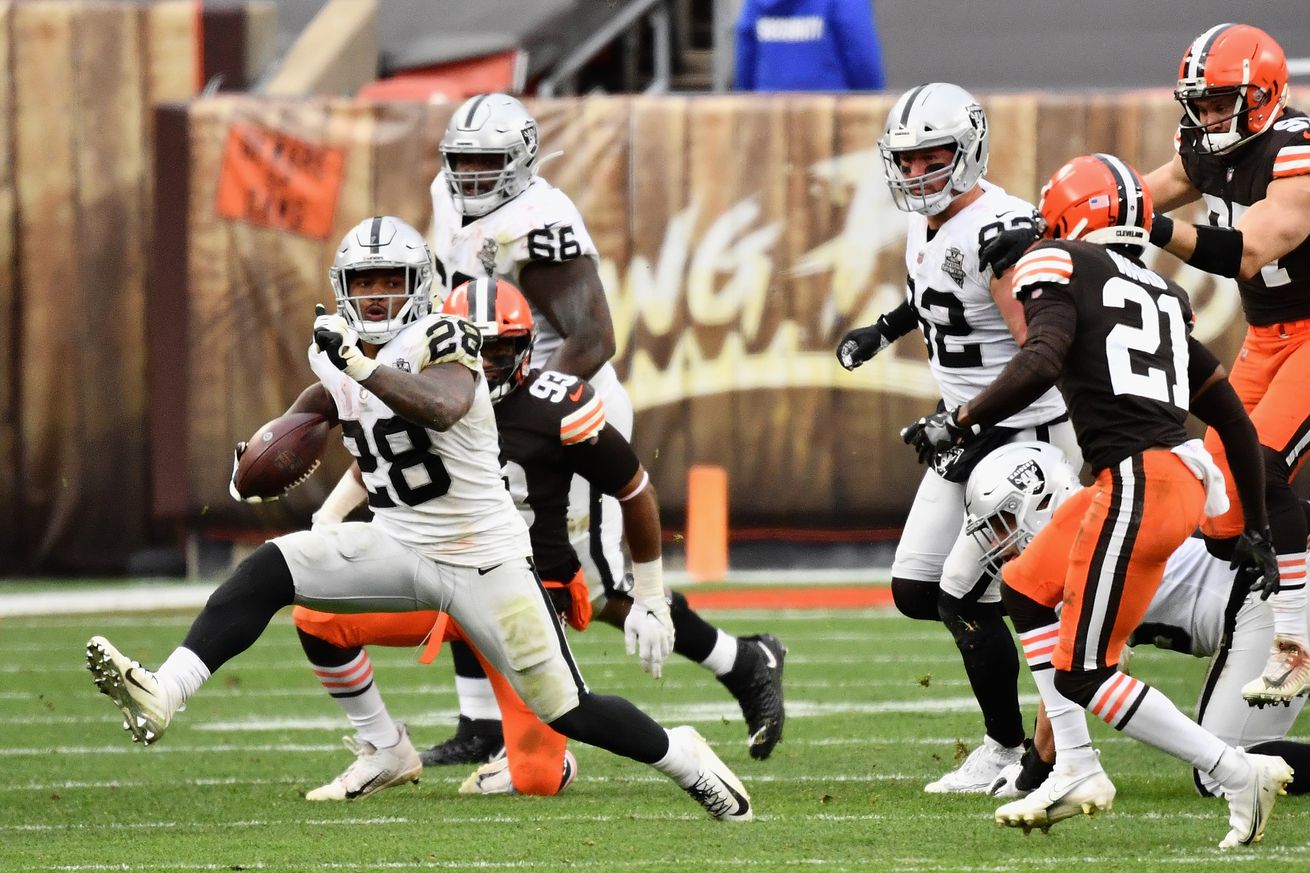 Well that was a fun — if bone-chilling — morning!

Let’s look at the keys to the Raiders’ 16-6 victory at the Cleveland Browns.

Raiders controlled game on ground:
It was a masterful performance by the Raiders. Josh Jacobs said he was embarrassed by getting just 17 rushing yards on 10 carries in a loss to Tampa Bay last week. He redeemed himself by getting 128 yards on 31 carries Sunday. It was his first 100-yard rushing game of the season. It was important that he had a 4.1 per carry average in the game.

Jacobs, who averaged 4.8 yards as a rookie last season, entered the game averaging just 3.4 yards per carry this season. The Raiders had 208 rushing yards and quarterback Derek Carr and backup running back DeVontae Booker both had big run plays. The Raiders ran 71 plays and controlled the clock for 37 minutes, 43 seconds. Their ability to run the ball helped the Raiders control this game.

Kudos to offensive line:
Of course, a major reason why the Raiders ran the ball so well was a great effort from the offensive line. This group battled. Shortly before the game. right tackle Trent Brown fell ill and had to be “wheeled out” of the locker room according to Carr. Brown is expected to be OK. Then, Brown’s replacement, Sam Young, left the game in the second quarter and was replaced by little-used Brandon Parker. The Raiders dealt with the adversity and controlled the line of scrimmage.

Raiders adjusted better to weather:
The Raiders looked like a team used to playing in bad weather, while the Browns were sloppy and had a worse time with the whipping wind, which Raiders’ receiver Hunter Renfrow said felt worse than a hurricane. Raiders coach Jon Gruden noted that the Raiders haven’t felt rain in Las Vegas in 119 days but they ended up handing the poor conditions well.

Defense is better:
Gruden promised changes and the Raiders ended up blitzing more and did seem to be more aggressive on defense. But let’s face it. This was a weather game. The key is to see the Raiders come out and play well in perfect conditions next week at the Los Angeles Chargers.

Schedule gets easier:
This win was huge for a lot of reasons. But the Raiders are now 4-3 with an easy schedule coming up. They have very winnable games against the Chargers and Denver Broncos before a huge rematch against the Kansas City Chiefs at home on Nov. 22. The Raiders should be 6-3 when they face Kansas City.

The Raiders have just three games remaining against three teams with a current winning record — the Chiefs, Dolphins and Colts.