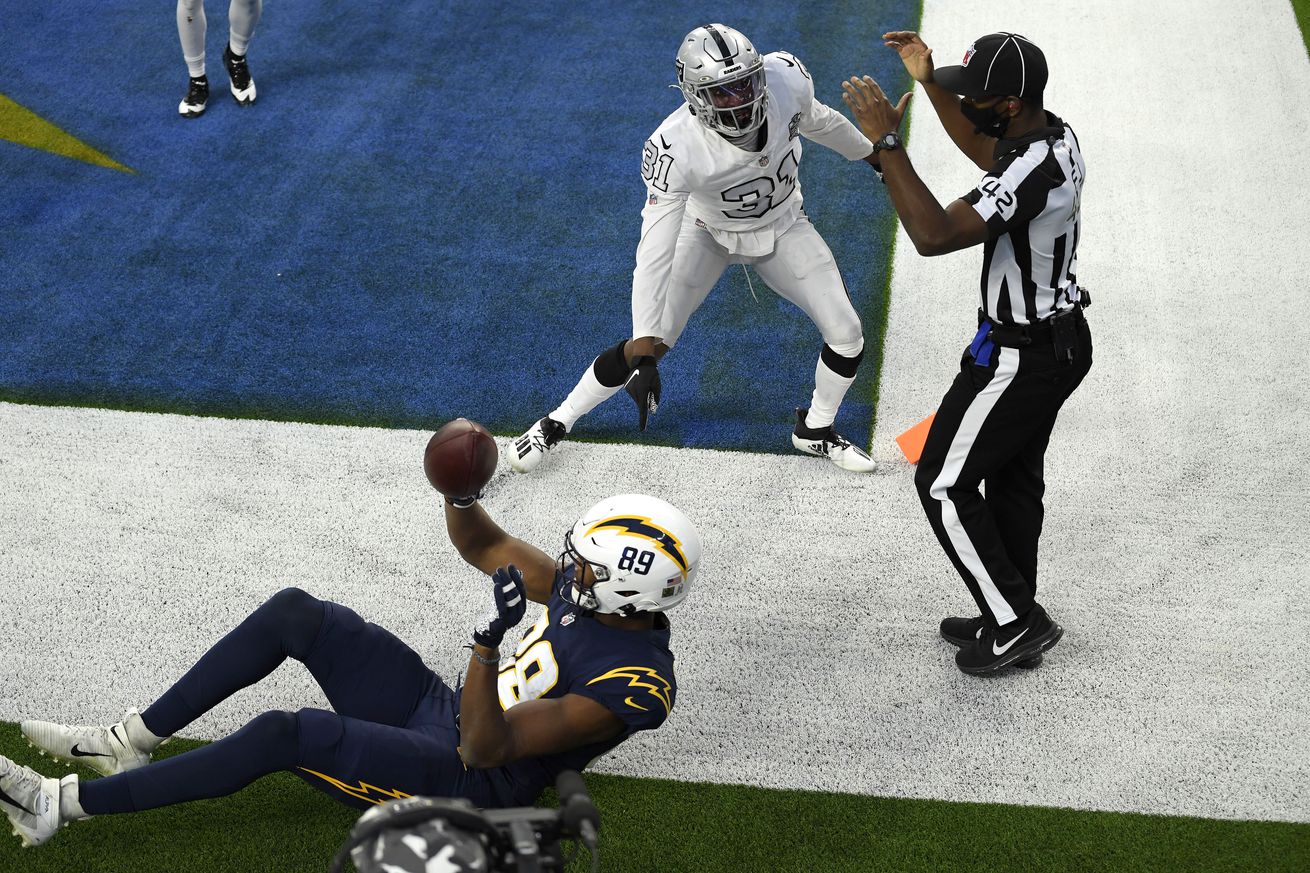 What an incredible, wild Week 9 game!

Let’s look at the keys to a 31-26 Las Vegas Raiders’ win at the Los Angeles Chargers on Sunday.

Isaiah Johnson stars:
The Raiders have been high on Johnson since drafting him in the fourth round in 2019. But injuries slowed his development. Ironically, an injury opened the door for him Sunday as he took over for Trayvon Mullen in the second quarter when the starter left the game with a hamstring injury. Johnson was very active and he was in coverage on the final two plays of the game when the Chargers narrowly missed scoring game-winning a touchdown.

Of course, the last play of the game was an overturned touchdown in which Johnson did just enough to save the game. Expect to see more of him moving forward.

“I knew if I could rake it out we could possibly win the game.”@_bigplayzay breaks down THAT play. pic.twitter.com/NduhIVgnb1

The Chargers have to be cursed:
On Sunday, we found out the Chargers can screw up comebacks just as badly as they can blow games. They had the 32-31 win … until they didn’t. The Chargers contributed to their loss with questionable clock management on the final drive. There was no urgency when there should have been urgency.

Jon Gruden fully behind Derek Carr:
The Raiders’ quarterback didn’t have a huge stats day. He completed just 13 of 23 passes for 165 yards. But he had a huge third quarter and made plays with his arm, legs and his leaping ability. After the game, Raiders coach Jon Gruden said he was proud of Carr and he is excited for the future with him. That was telling. So, perhaps we will have a quiet offseason on the Raiders’ quarterback front.

Run game shines again:
The Raiders had 160 yards rushing and averaged 6.1 yards a carry. Starter Josh Jacobs had 65 yards on 14 carries and backup Devontae Booker had 68 yards on eight carries. For the second straight week, the Raiders won on the road in large part because of their ground game.

Defense still an issue:
It’s a win and that’s what matters. But let’s face it, the Chargers could have easily finished that drive and won the game and the Raiders would have allowed 30-plus points again. The Raiders had just two sacks against the offensive line that has allowed the most pressures in the NFL this season.

The unit, as a whole, has to get better as the team makes a serious playoff push in the second half of the season.