Could CeeDee Lamb be heading to Las Vegas? ESPN’s Josina Anderson reports (via Twitter) that the Raiders “really like” the Oklahoma wide receiver. 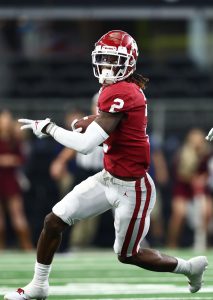 Lamb told Anderson that he had a difficult time reading into the Raiders’ interest in him during pre-draft interviews.

“Coach Gruden & Mayock were as serious as possible,” Lamb said. “I mean Gruden is a jokester, that’s my dog…but he and I have great vision in open space to the movement in front of me. That’s what helps me. My reaction time is very fast. That’s guaranteed.”

Still, Anderson’s source “reaffirms” the organization’s interest in the wideout, and the reporter heard similar rumblings last week. This isn’t the first time we’ve heard the Raiders connected to a receiver prospect; yesterday, we heard that the organization was interested in Henry Ruggs.

Lamb, a consensus All-American in 2019, should be one of the first (if not the first) receiver off the board in tonight’s first round. The 6-foot-2, 191-pound wideout finished last season with 62 receptions for 1,327 yards and 14 touchdowns. That was Lamb’s second-straight season with at least 1,000 yards and 10+ touchdowns.

The Raiders are currently sitting with a pair of first-rounders in No. 12 and No. 19.