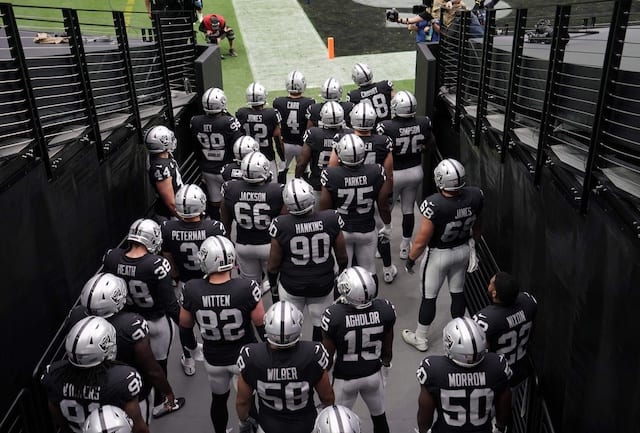 The last time the Las Vegas Raiders won three straight games in the division was 2010 — but on Sunday, they have a really good chance to repeat the feat with the 3-5 Denver Broncos coming to town. In a lot of ways, Sunday will be a revealing moment for the Raiders, but the biggest revelation will be how they play as the favorite.

Despite being 5-3 this season, the Raiders have started the week as underdogs seven times — their last seven games no less — and yet this week, they stand as 4.5-point favorites at home. The reason this is critical is because if things go the way they’re hoping, the Raiders will be favored quite a bit down the stretch after facing one of the hardest schedules in the league thus far.

We know they can win as the underdog, but can they take care of business as the favorite?

1) Last week I told you the over was easy money (it was), but this week should be a bit more interesting. At first glance the Broncos defense isn’t much to write home about, but according to DVOA, they’ve got the ninth-best defense in the league (the Raiders are No. 30). Add in the fact that the Raiders will once again (it appears) be without Kolton Miller, Richie Incognito and Trent Brown, and it will be up to Derek Carr and Jon Gruden to find ways to patch it together offensively. I still like the over because I trust the Raiders offense no matter who they’re playing (and feel the exact opposite way about the Raiders defense), but it might come down to the wire.

2) The Raiders will be without their biggest offseason addition this week in Cory Littleton as the linebacker finds himself on the Reserve/COVID-19 list (although, thankfully, he is feeling alright). Littleton was supposed to be the center of a revamped defensive unit, but instead he has been an unmitigated disaster. That said, what the Raiders have behind him is likely a whole lot worse. Yes, Littleton has been “below average” this season, but I have a feeling the Raiders are going to be longing for that type of performance after seeing what Noah Fant does to them this week.

3) Experts always say that the turnover battle is key to winning football games, and this Sunday it might be even more true. The Raiders enter the week 31st in the league when it comes to forcing turnovers (5), while the Broncos are 30th in giving it away (16). At the center of that problem for Denver is quarterback Drew Lock, who has thrown an interception in four straight games for a total of six over that stretch. If the Raiders are going to win this game, they need to keep that streak alive.

1) Don’t worry, I’m not going to tell you Henry Ruggs III is a breakout guy to watch again this week after he caught precisely zero passes last Sunday. If I knew undrafted rookie Javin White was going to get Littleton’s snaps, I might take a shot on him being a standout on Sunday — but it sounds like Nicholas Morrow will be the primary guy to fill-in there. So I’m going to go with the defensive line this week and say that the group up front has a great performance in stopping the run and getting to the quarterback. Clelin Ferrell has been much maligned as a top draft pick, but PFF has him with a 77.7 grade, which is 13th among all EDGE players who have seen more than 50% of defensive snaps. Likewise, Carl Nassib has been a nice find for the Raiders as a situational pass-rusher (1.5 sacks) alongside Maxx Crosby (5.0 sacks).

Prediction: Three sacks for the Raider defensive line and under 100 rushing yards allowed

2) For me, this is the definition of a trap game for the Raiders. It’s a let-down waiting to happen given who the Raiders have played, to now travel back home as more than a field goal favorites — against a team that is probably a bit better than their record would indicate. The Raiders should absolutely win this game, and they should do it comfortably — but I’ll admit I’m a bit worried.