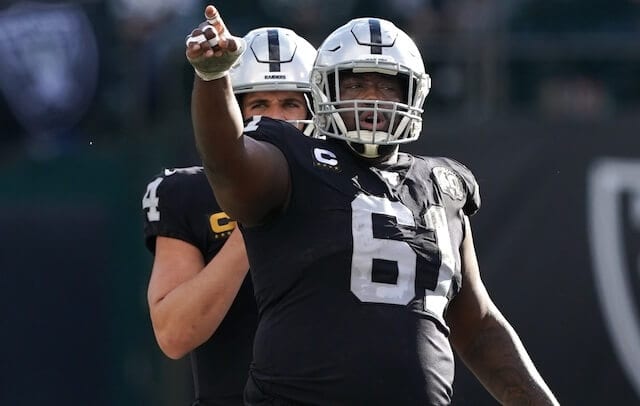 One of the Las Vegas Raiders’ biggest strengths in the last handful of years has been their offensive line, regardless of who is in the lineup.

A big reason for that has been the production and consistency of Rodney Hudson, who is arguably the best center in all of football.

Additionally, the Raiders have put significant resources into building up their offensive line in recent years, drafting left tackle Kolton Miller in the first round out of UCLA and signing right tackle Trent Brown to a record-breaking contract. They have also taken care of both of their guards, giving recent extensions to Richie Incognito and Gabe Jackson.

That five-man unit was one of the best offensive lines in the league in 2019 and expected to be so again in 2020. In fact, Timo Riske of Pro Football Focus ranked them as the best pass-blocking offensive line going into the season:

Anchored by Rodney Hudson — the best center in the NFL — the Raiders lead our rankings. The team hasn’t lost a starter from their very good 2019 unit, and since continuity matters, that’s enough of a reason for us to put them in the top spot. Their only weak link, left tackle Kolton Miller, improved significantly in 2019 and can be expected to further improve to some extent. If everything goes well, there should be no excuses for Derek Carr in 2020.

The Raiders actually excelled more in the run game than the pass game in 2019 due to the holes the offensive line was able to open for Josh Jacobs and his ability to find them and avoid being tackled.

With some new weapons in place for the 2020 season though, the Raiders should be a more vertical offense, which is why Brown believes they have a chance to be ‘scary’ on that side of the ball.

The Raiders also have a ton of depth on their offensive line, so even if some of their starters get injured, they shouldn’t miss a beat this season.