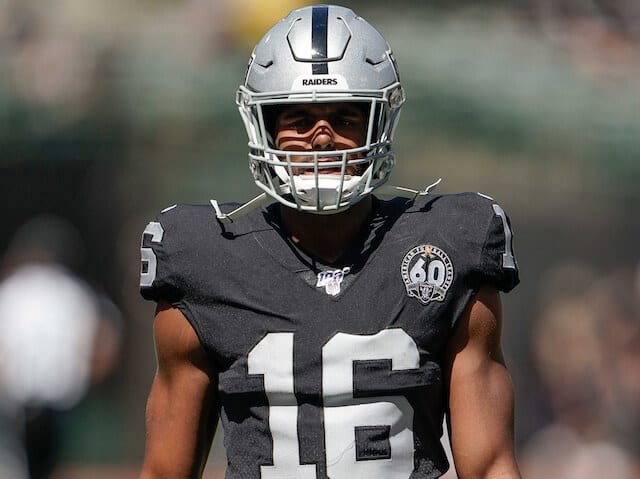 Las Vegas Raiders wide receiver Tyrell Williams will be entering his second season with the team in 2020 and his sixth year in the league. In 2016, when San Francisco 49ers quarterback Colin Kaepernick began kneeling about racial injustice and President Donald Trump started causing controversy with his tweets, Williams was in his second year with the San Diego Chargers.

Given that he was just 24 and in his first full-length season in the NFL, Williams was not one of those players to risk their careers by kneeling like Kaepernick and Eric Reid. However, with a few more years under his belt and a steady job on the Raiders, Williams feels a lot more comfortable speaking his mind on social media.

On Friday, Trump tweeted yet again about kneeling and how he will not watch if players choose to do so this season. Williams responded to the President, asking if anybody really cares about whether or not Trump will be watching football in the fall, via his official Twitter:

Are we supposed to care? https://t.co/7AnkbJpqht

While there are likely many people who actually do care whether or not Trump watches, it’s doubtful that any of those people are NFL players. Williams is not the only professional athlete to respond to this same tweet by the President. NBA players JJ Redick and Jayson Tatum also voiced their issues with this tweet, generally with the same tone as Williams.

With everything that has been going on in the country in recent weeks after George Floyd and other people of color were killed at the hands of police officers, there has been extra attention drawn to Kaepernick’s cause.

Kneeling and racial justice protesting will be a huge factor this year, especially if no fans will be in attendance at games. Having it be talked about at length now may help to focus the conversation back on the real issues by the time the season begins.