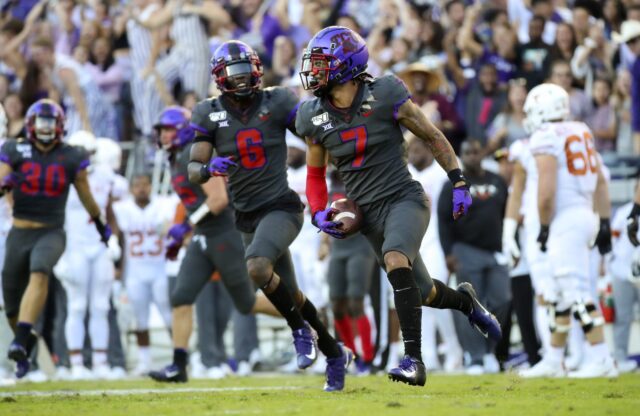 The Las Vegas Raiders addressed their biggest needs with their first two picks in the 2021 NFL Draft. After using their first selection to fill the void up front with tackle Alex Leatherwood, they wasted no time adding another piece to the secondary in TCU safety Trevon Moehrig with the No. 43 pick.

The Raiders clearly thought highly of Moehrig after moving up five spots in a trade with the San Francisco 49ers in order to get him. It seems the prospect of letting a prospect of his caliber slide any further in the second round was not an option for general manager Mike Mayock.

The Raiders invested some major draft capital in recent years to revamp the secondary with former first and second-round picks. Despite being a rookie, Moehrig will have an opportunity to take on a leadership role right off the bat.

Key starters like safety Johnathan Abram along with cornerbacks Damon Arnette and Trayvon Mullen, are still in the early stages of their careers. The 21-year-old was asked whether he feels comfortable as a potential leader given the current personnel in the secondary.

“For sure,” Moehrig said. “Like I said before, coming from TCU I was the quarterback of the defense, so I feel like I’m really confident coming in and taking that leadership role, command of the defense, taking the reins and just leading. I’m super comfortable with that, confident with it and I’m just excited to get started.”

Moehrig established himself as one of the most talented safety prospects in this draft as the reigning Jim Thorpe Award winner. However, concerns about his reported back issues seemingly caused him to slide into the second round.

Fortunately, Mayock says that the team had done their fair share of due diligence on Moehrig and the scouting report still favored him heavily.

“We had scouts at his Pro Day,” Mayock said. “He had some stuff that he wore on his back. We were very thorough, we checked it out. Our doctors gave him a more than a pass grade – a high-level grade. So, we had zero issues with his back. That’s first and foremost. No. 2, the trade up. In all honesty I was thinking about trying to come up and get him at the end of the first round yesterday. I was stunned that he was still there. I knew Dallas – I think they were at 44 I want to say, we were at 48 – and I thought Dallas was going to take him at 44. So, we started working the phones. We got ahold of San Francisco. They did a great job. (laughter) We spent a lot of time on the phone with San Francisco trying to get to the right deal. They wanted a pick that I didn’t want to give them. We ended up compromising back and forth. Believe it or not, a seventh-round pick was important to get back to me. So anyway, probably more details than you guys care. But we went from 48 to 43, got ahead of Dallas and we felt great about that. He’s our No. 1 rated safety. We had him with a big grade on our board. So, we got a guy with a first-round grade at 43 in the second round. So, we’re pretty excited.”

The Raiders made efforts to revamp the defense under new coordinator Gus Bradley this offseason. Mayock is confident that his versatility and leadership skills will make him an ideal partner to Abram over the top.

“We have some pretty good connections at TCU and everybody down there banged the table for this young man,” Mayock said. “Not just the football player but as a foundation-type human being and player and that was important to us. We think he’s intelligent enough to run the defense back there. We think he brings a foundation background into our locker room, which is important. And then as far as the skillset, it’s pretty cool. Because you guys know a little bit about Gus’ defense, even if you go back to Seattle, it was Earl Thomas and Kam Chancellor. And they both had, kind of, predetermined roles. It wasn’t two safeties that were inverting back and forth. It really was a post safety and a box safety, and in our defense, John Abram is going to be that box safety. Jeff Heath, at this point, is our post safety. But Moehrig is a guy that we think can step in and compete at post safety. He had seven picks in his career, 24 PBUs, great range, tackles. He’s going to be a free safety. We think – ultimately – for a long period of time he and John can be a pretty interesting tandem.”

Moehrig’s potential as an immediate contributor could make him one of the biggest steals in the draft during the 2021 NFL season. Although the Raiders have struggled to get the most out of their recent early picks in the secondary, Mayock is hoping the arrival of Bradley can help turn their fortunes around.