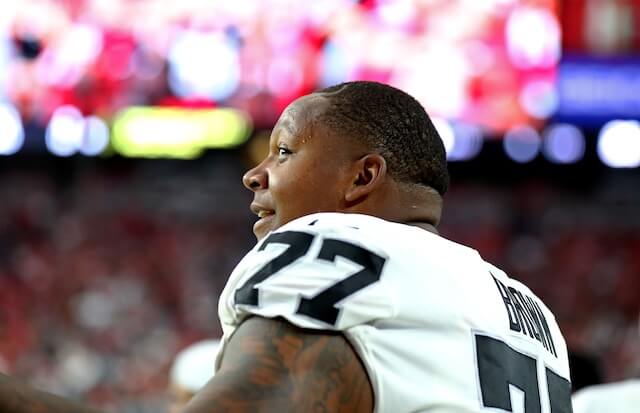 The Las Vegas Raiders broke the bank last offseason when they gave free-agent offensive tackle Trent Brown a four-year, $66 million contract, which was the largest ever for a player at his position.

Brown proved why he deserved that contract this past season when he was one of just two Raiders named to the Pro Bowl and was a big reason the team had one of the best offensive lines in the league.

As Brown gets ready to begin his second season with the Raiders, he has begun opening up to the media a bit more to allow the fans to get to know him. In a recent interview on The Lefkoe Show, Brown actually revealed that the first sport he tried out when he was a child was gymnastics, via Kyle Martin of Raiders.com:

“I ain’t been able to flip since I was, like, nine years old, but when I was younger — people don’t know this — the first sport I participated in was gymnastics,” Brown revealed. “It was really just a free-for-all class every Saturday morning at the YMCA. It was balance beams, the rings, everything in [the gym] really. As I got older I got better, I could do pretty much everything. I wasn’t advanced — I’m always amazed by people who can be in the air for 12 seconds doing all sorts of [stuff]. I was really doing just little regular flips, like, from a cartwheel to a backflip.”

For someone that is 6’8″ and 350 pounds and likely was also very large as a child, gymnastics isn’t the first sports that would have come to mind. He does display a tremendous amount of athleticism, agility and flexibility while playing right tackle though, which could be a result of his history as a gymnast.

While he enjoyed it as a kid though, Brown doesn’t anticipate another attempt at becoming a professional gymnast:

“I’d probably die,” Brown joked when asked what would happen if he tried to do a flip. “I promise you, if I fall on my neck it’s over with.”

Brown ended last season on injured reserve due to a pectoral injury, although the belief is that he is 100 percent healthy and ready to go for the 2020 season as the Raiders get ready to report to training camp at the end of the month.

The post Raiders News: Trent Brown Reveals Gymnastics Was First Sport He Participated In As A Kid appeared first on Raiders Newswire.