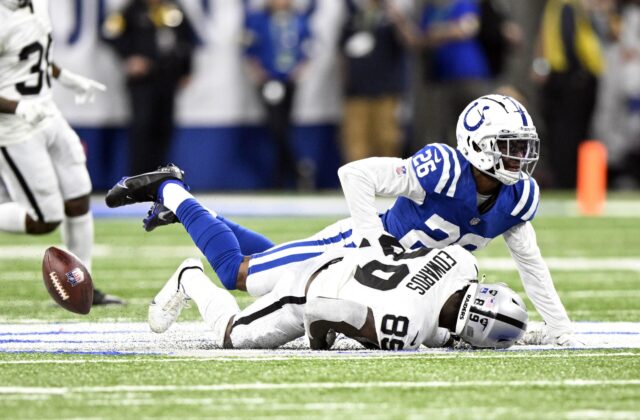 The key to the Las Vegas Raiders’ success in the 2022 season will come down to their defense.

The offense is electric on paper after the Raiders added Davante Adams, but their ability to get off the field defensively will determine their Super Bowl viability. Their pass rush should be lethal with Maxx Crosby and Chandler Jones, but there are questions about how well the secondary can hold up.

In order to address that, they sent Yannick Ngakoue to the Indianapolis Colts for Rock Ya-Sin. So far, it sounds like Ya-Sin has been impressing in offseason workouts via Tashan Reed of The Athletic:

“Rock Ya-Sin looked good. The soft-spoken corner hasn’t been talked about much, but it’s not because he’s performed poorly. He’s been consistent, fluid and in the right position regardless of who he’s matched up against. Mullen’s health aside, the Raiders need Ya-Sin to be a good starting corner this season. He had an up-and-down career with the Colts, but he was steady through the offseason program.”

Defensive backs coach Jason Simmons has liked what he has seen from Ya-Sin and highlighted his ability to absorb information:

“What I see from Rock is that he is a pro’s pro,” Simmons said. “I love the way that he prepares. You can tell that he’s a guy that loves the game and a guy that wants to get better. So, I’ve really been impressed with him from that standpoint. And he’s another guy that is a sponge. He wants as much as you can give him and he’s able to take that information and process it.”

After Casey Hayward’s departure, corner is going to be a position to watch out for but hopefully, Ya-Sin is up to the task. Las Vegas has legitimate title aspirations this year, and Ya-Sin will have to play a big role in helping them get there.