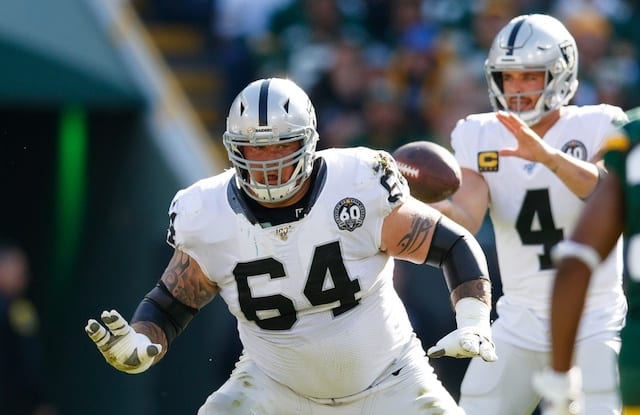 The Las Vegas Raiders have put an emphasis on fortifying their offensive line in recent years. Among the notable factors that helped kickstart their resurgence up front was the arrival of guard Richie Incognito. The veteran helped serve as a stabilizing factor for this ailing group during the 2019 campaign.

Incognito has provided plenty of bang for his buck as not only an integral piece of the offensive line, but as a mentor for some of the younger members that have come aboard. It seems he is confident that the future of this group is in good hands.

According to Vic Tafur of The Athletic, Incognito shared some heavy praise for his fellow members such as tackles Kolton Miller and Trent Brown:

“There is no doubt that Kolton Miller will be a Pro Bowl-type player in the next season or two,” Incognito said. “He’s got stronger and Coach Gruden has been referring to how he’s become a quiet leader on the team. …

“My job when I came in was to hang out with him and (rookie center Andre James). We would sit at Coach Cable’s place in Alameda and watch film every single day. We watched our film, we watched (old friend and Titans tackle Taylor) Lewan on film … and we would also pick the brain of Trent Brown. He reminds me of Orlando Pace.”

Incognito added that he has embraced taking on a leadership role in the locker room:

“I think I earned their respect and trust and they see that I love them,” Incognito said. “They have no idea how much I love them. When I was starting out with the Rams, Isaac Bruce would always tell me to never lose that passion, and that is the message I carry now.”

The advice from Hall of Fame wide receiver Issac Bruce certainly resonated with a young Incognito starting off with the St. Louis Rams. It is safe to say that he has managed to keep that same level of passion now in the final street of his career.

Jon Gruden has often acknowledged the importance of building the locker room culture into a positive one. Although the decision to bring Incognito aboard initially raised some questions, it has clearly helped pay huge dividends for the team.

Incognito is now set to help the Raiders usher in a new era at Allegiant Stadium in the 2020 NFL season. He is clearly adamant about not showing any signs of slowing down in the near future.