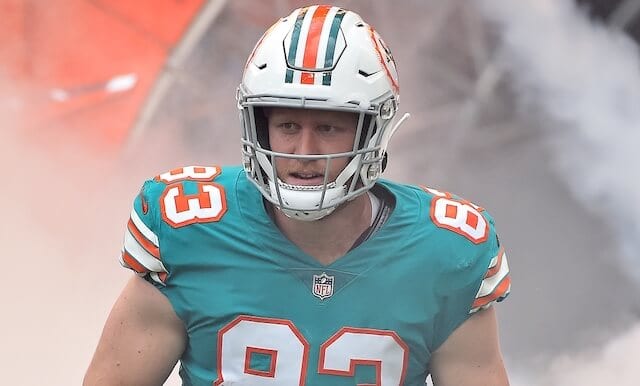 Despite already having Darren Waller, Foster Moreau and Derek Carrier on the roster, the tight end position seemed to be something the Las Vegas Raiders prioritized this offseason.

Not only did they bring in a veteran presence in Jason Witten, but they also signed Nick O’Leary to add some depth at the position.

Unfortunately, O’Leary’s season was cut short before it even began as the Raiders recently placed him on the reserve/non-football injury list and signed tight end Paul Butler as a replacement.

The recent for that was recently revealed as according to Tom D’Angelo of The Palm Beach Post, O’Leary had a heart attack and was forced to undergo a pretty serious heart surgery:

NFL tight end Nick O’Leary had surgery to clear 100 percent blockage to the heart last month but is expected to make a full recovery and hopes to resume his football career next season.

Luckily, O’Leary said that the surgery was a success and he is hoping to make a return to the NFL in 2021:

“I feel good,” O’Leary, 27, said Monday. “I feel better than I did before. I’ve got to be on blood thinners for six months to a year. That’s really the only reason now why I can’t play football. If I (got cut), they said that would be the biggest problem, wouldn’t be able to stop the bleeding.”

Obviously O’Leary’s health is the most important thing, so it is good to see that he caught the heart issue early and was able to get it taken care of.

It will be interesting to see if he remains involved with the Raiders during the 2020 season since he technically is still a member of the organization.

In 59 career NFL games across five seasons, O’Leary has caught 53 passes for 668 yards and four touchdowns. If he is healthy and ready to go for the 2021 season then it would not be surprising to see the Raiders take another chance on him.