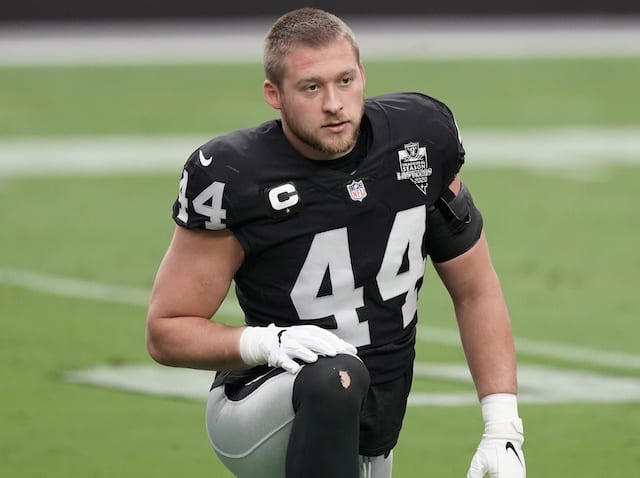 Although the Las Vegas Raiders may have come up short against the Buffalo Bills in Week 4, head coach Jon Gruden was able to find a number of silver linings to take away from it. Among them, was the return of their defensive shot-caller in linebacker Nick Kwiatkoski.

Kwiatkoski had been sidelined since the 2020 NFL season opener versus the Carolina Panthers after suffering a pectoral injury. His absence dealt a crushing blow to this Raiders’ defense given his role as the leader and play-caller for defensive coordinator Paul Guenther.

Kwiatkoski certainly had his work cut out returning against a high-powered Buffalo Bills offense. Regardless, he was admittedly happy to be back after missing two games, per the team’s website:

“To start it off, I hate missing games,” Kwiatkoski told reporters after the game Sunday. “I want to be out there no matter whether it’s win or lose — you want to be out there with your team. So, today, just coming in I was happy to be back and just get back to business as usual.”

Kwiatkoski added that he was able to resume his role as the voice of this defense.:

“There were no mishaps, there was great communication,” he said. “I can’t speak on the last two games, but we kind of left off where I was at in Carolina a couple of weeks ago. Calls were coming in and there were no problems.”

The timing of the injury was hardly ideal for Kwiatkoski considering his arrival had come with high expectations. Unfortunately, the restrictions placed in response to the coronavirus (COVID-19) pandemic this offseason forced him to get a late start and the injured pec only caused another setback.

Fortunately, Kwiatkoski’s comments indicate that he is not feeling any rust or side effects of the limited action. He will now be tasked with helping this group kick things up a notch moving forward.

While the Raiders initially struggled to contain quarterback Josh Allen they managed to make the necessary adjustments at halftime to hold the Bills scoreless in the third quarter. Unfortunately, the three second-half turnovers from the offense ultimately came back to haunt them in the 30-23 loss.

Despite Kwiatkoski being able to make his return, it is safe to say that Las Vegas will continue to monitor his activity in practice. Things will not get any easier for the defense as they get set to hit the road to take on quarterback Patrick Mahomes and the Kansas City Chiefs’ offense.

The post Raiders News: Nick Kwiatkoski Happy To Be Back After Missing Games Due To Pec Injury appeared first on Raiders Newswire.