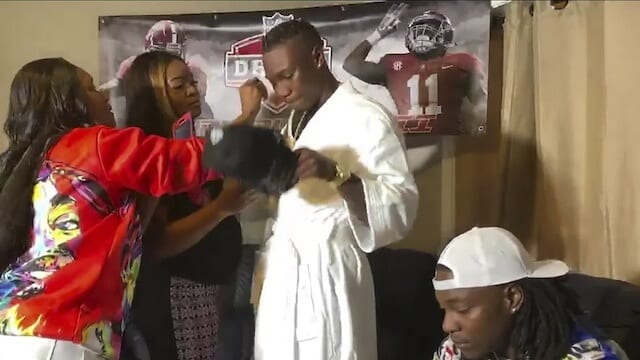 It was clear the Las Vegas Raiders needed a wide receiver entering the 2020 NFL Draft, and when they were on the clock with the 12th overall pick, they had their pick of the litter in what was believed to be one of the best receiver classes ever.

Ultimately, the Raiders decided to go with the fastest receiver in the draft in Henry Ruggs III over his Alabama teammate Jerry Jeudy and Oklahoma’s CeeDee Lamb, who both went a few picks later to the Denver Broncos and Dallas Cowboys, respectively.

The Raiders have always valued speed at the wide receiver position, and they believe Ruggs will open up their offense by giving them the vertical threat they have lacked in recent years.

As the season inches closer, Cynthia Frelund of NFL.com ranked who she believes will be the most productive rookie wide receivers in 2020, and Ruggs came in at No. 2 behind Lamb:

Ruggs could have more fantasy upside with the Raiders than Lamb does with the Cowboys, but there could also be a lot more potential downside with Ruggs than with many of the receivers ranked lower on this list. Ruggs lined up wide in 80 percent of his Alabama snaps and last season earned 10.5 yards after the catch per reception (third-most in the SEC among those with 30-plus targets, per PFF). Ruggs is a riskier pick, because while his physical attributes (he’s fast, if you haven’t heard) project for a lot of opportunity and have driven success in past offenses run by Raiders coach Jon Gruden, other key high-value metrics, like route-running aptitude (computer vision shows he hasn’t run the full route tree as often or as precisely as other receivers in this class), are unknown and therefore introduce fantasy risk. Preseason performance will likely help refine Ruggs’ projection more than it will for any other rookie wideout. Ruggs is currently my No. 42 WR overall.

The Raiders will have a ton of mouths to feed on offense as Josh Jacobs and Darren Waller are still expected to be focal points, while Tyrell Williams, Hunter Renfrow, Zay Jones, Nelson Agholor, Foster Moreau, Jason Witten and rookies Bryant Edwards and Lynn Bowden Jr. will all be vying for touches as well.

Ruggs’ talent is undeniable though, so he could be the ultimate difference-maker for the Raiders offense in 2020, which should be much-improved from a year ago.