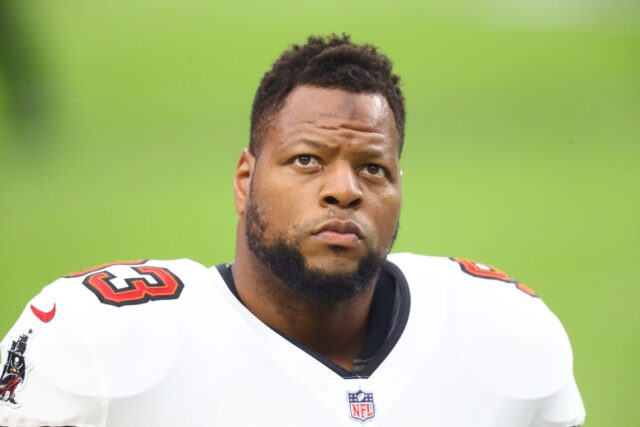 The Las Vegas Raiders have had a busy offseason making some major additions to the team. The franchise has traded for star receiver Davante Adams and signed pass rusher Chandler Jones in free agency, but Jones may not be the only addition to the Raiders’ defensive line.

One of the top remaining free agents is defensive tackle Ndamukong Suh. The five-time All-Pro recently won his first Super Bowl Championship in 2020 with the Tampa Bay Buccaneers, and even though he has been in the NFL for 12 seasons, he still has a lot to provide a team on the interior of the line.

Though Suh is still currently unsigned, he has had some conversations with a couple of teams, and chief among them is the Raiders as Tyler Dragon of USA Today reports there is mutual interest between the two sides:

There is mutual interest between the Raiders and Ndamukong Suh, per a source. Another team to keep an eye on is the Vikings. The Raiders and Vikings have both had multiple conversations with the free-agent DT.

While Suh is no longer the dominant force he was in his earlier years, he is still an extremely talented player who could fit well with the Raiders’ pass-rushing duo of Jones and Maxx Crosby. In fact, Suh has admitted that he has already been in contact with both of the Raiders’ pass rushers.

The Raiders are expected to move to a 3-4 defense under new defensive coordinator Patrick Graham and Suh does have experience in that system. The Raiders also have a need along their line, with the likes of Johnathan Hankins, Bilal Nichols and Vernon Butler atop the depth chart for interior linemen.

Suh has spent the last three seasons with the Buccaneers, where he totaled 112 tackles, 14.5 sacks, 23 tackles for loss and 46 QB hits. He is also extremely durable, having not missed a game since 2011, which is the only season of his career in which he didn’t play in every game.