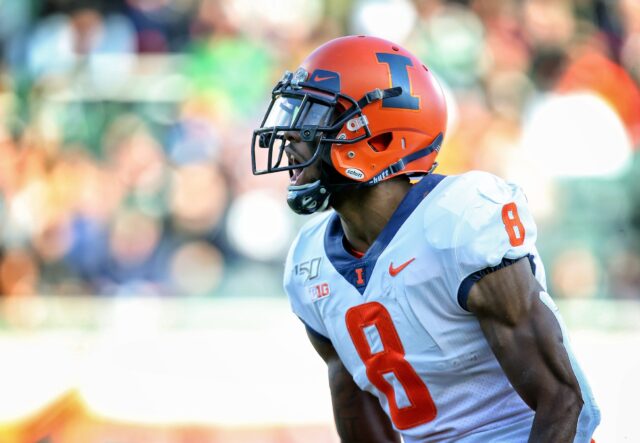 The 2021 NFL Draft is officially in the books, and the Las Vegas Raiders made sure to shore up their most glaring needs.

The Raiders questionably used their first-round pick to select offensive tackle Alex Leatherwood but later took Trevon Moehrig in the second round after he slid down the board. From there, Las Vegas continued its run on defensive players, particularly in the secondary.

After taking Divine Deablo and Tyree Gillespie in the third and fourth rounds, respectively, the Raiders selected cornerback Nate Hobbs No. 167 overall. Hobbs had a solid career at the University of Illinois and made it known that he embraces his status as an underdog.

“That’s what I’ve been all my life; I don’t know anything else,” Hobbs said. “I came into high school, I didn’t play varsity until my junior year. A lot of people didn’t know who I was and I got on the scene quick and made the most of that. Got to college, I wasn’t a high recruit, I was about a two-star, only had one Power-5 offer. I made noise when I was in college that got me to the position where I am now.

“I was a fifth-round draft pick. I’m thankful to God. I’m just so thankful to the Raiders organization for taking a chance on me. I won’t forget that. I won’t forget the guys who were taken before me, the guys who I feel like didn’t do as much as me but were still picked up. I’m just so thankful for the Raiders for taking a chance, they won’t regret it. They’re getting the best underdog they’ve ever drafted.”

Hobbs has been overlooked his entire life as he was not highly recruited coming out of high school and struggled to see the field early on in college. However, he later showed exactly what he could do and ended his four-year career with 166 total tackles to go along with three interceptions and 11 pass breakups.

The defensive back and good size and length provide a nice depth piece for a secondary that now has more talent and skill. It will be interesting to see if Hobbs can make an impact in his rookie year.