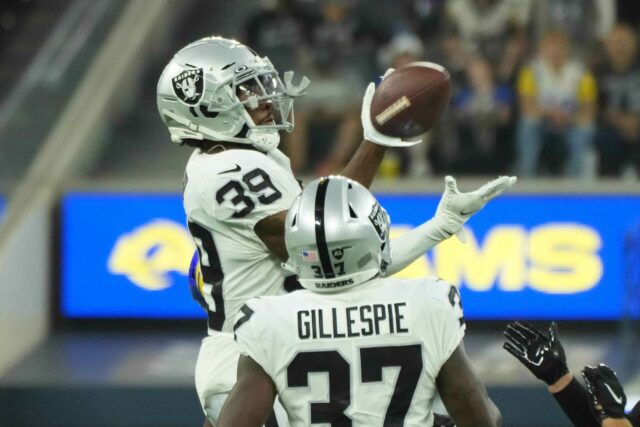 The Las Vegas Raiders defense flashed how much they have improved during the preseason, a credit to defensive coordinator Gus Bradley who is already impacting his ability to organize the players.

The secondary was a major concern in the offseason. The Raiders were prone to giving up explosive passing plays every week, which explains why they targeted several defensive backs in the 2021 NFL Draft. While Trevon Moehrig was the big name fans were excited about, it has been defensive back Nate Hobbs that has turned heads during the summer.

It is hard not to notice Hobbs when he was on the field as he seems to always be in the right spot and has a knack for making plays. Because of his productivity and hard work, Hobbs believes he has earned the trust of the coaching staff, according to Paul Gutierrez of ESPN:

“I feel like I’m gaining the coaches’ trust and they’re trusting me to play multiple spots,” Hobbs said. “I’m gaining a lot of knowledge for the game. Nickel is like part linebacker, part DB. Sometimes I have gaps, sometimes I have to be in the fit … as long as I continue trying to play fast, it will be good.”

Las Vegas took Hobbs No. 167 overall in the draft, and he has made quite the impression on the organization, especially during training camp and the preseason. Nevin Lawson is set to miss the first two games of the 2021 season as he serves his suspension, but it looks like the nickel cornerback position is Hobbs’ to lose.

Head coach Jon Gruden has been pleased with Hobbs as he has noted that the rookie rarely makes the same mistake twice. If a player has caught Gruden’s eye, they are surely going to be in line for snaps, and it looks like Hobbs will make a difference for the Silver and Black much sooner than anyone anticipated.