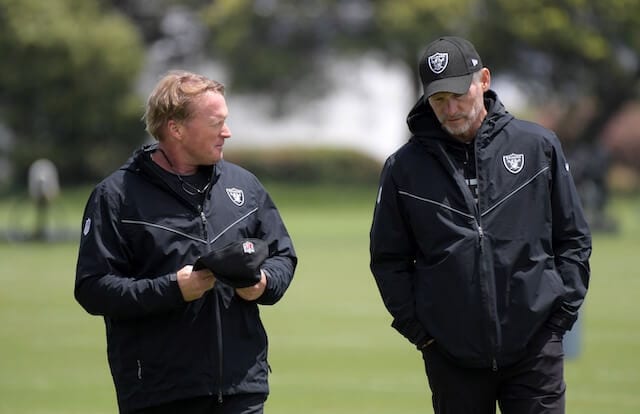 This offseason has been a busy one for the Las Vegas Raiders as not only has their roster undergone a ton of changes, but they also completed a move from Oakland to the desert to start a new chapter in the franchise’s storied history.

Additionally, while all of that has been going on, the organization has been forced to deal with the coronavirus (COVID-19) pandemic which has forced them to work from home and conduct all meetings and workouts virtually.

The NFL recently began allowing coaches and staff members to return to offices, although the Raiders had yet to do so as their new practice facility in Henderson, Intermountain Healthcare Performance Center, was not yet complete.

That changed on Monday though as the Raiders posted a picture of general manager Mike Mayock returning to work at the new facility for the first time:

Raiders head coach Jon Gruden was also believed to be at the office, with a number of his staff members likely joining him as well.

It is unclear when the players will be allowed to begin working at the Henderson practice facility, although it may not be until the start of training camp in July.

Raiders players have been conducting their own workouts led by Derek Carr in recent weeks with as many as 32 players attending at a time. The NFL recently announced that those will no longer be allowed for the time being though with some teams announcing that players tested positive for coronavirus, so Raiders players may have to go back to individual workouts until training camp.

Now that staff members are back in the office though, the Raiders’ real preparation for the 2020 season can begin. With so many solid additions this offseason, Las Vegas will be looking to make some noise in their first season in their new home.