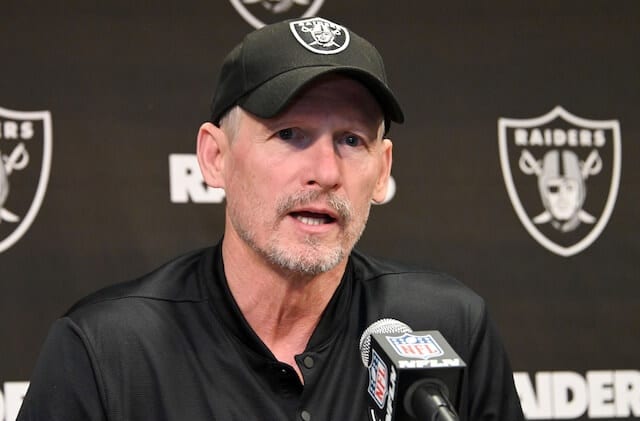 Although every team is navigating through uncharted waters amid the coronavirus (COVID-19) pandemic this offseason, the Las Vegas Raiders have had to deal with their own set of challenges while trying to complete their relocation.

Fortunately, it seems all has gone according to plan with the building of their new $2 billion, 65,000-seat stadium just off The Strip in Las Vegas. They also recently made themselves at home after welcoming 70 of its essential staff into the 335,000 square-foot practice facility in nearby Henderson this week.

While it has not been an easy transition, the Raiders have managed to make the most of it both on and off the field by sparing no expense. It appears even general manager Mike Mayock is impressed with the result.

According to Vincent Bonsignore of the Las Vegas Review-Journal, Mayock admits that he was taken by the new facilities:

“It’s a magnificent building,” Mayock said. “It’s hard to put into words, and honestly I have to still get used to it because it’s so big and so different from what we’re used to. But it’s amazing.”

Mayock added that it was an ideal way to get all the staff acquainted after the restrictions that were placed by the league due to the ongoing pandemic:

“To me that was the biggest thing,” Mayock said. “As much as I love this new building and how much I want to get used to it and get comfortable with it, the biggest thing is just being around the guys. We’ve seen each other on Zoom calls for too long now.

It is safe to say that the sense of excitement has resonated throughout the organization following an offseason of notable additions through free agency and the 2020 NFL Draft.

Now that the Raiders have managed to navigate through their biggest hurdle of the offseason, they can now focus on getting back to business in preparation for the 2020 NFL season. The NFL has granted teams some autonomy when it comes to determining safety guidelines based on the restrictions set by their local governments. This includes setting their own limits on the number of staff and players they would like to bring in for training camp.

Meanwhile, Las Vegas continues to get accustomed to life as the NFL’s newest host city. The ongoing pandemic robbed them of its chance to acknowledge its newfound status after this year’s draft was cancelled, however, the league has since made up for it by bringing the 2021 Pro Bowl and 2022 NFL Draft to town.

The post Raiders News: Mike Mayock Impressed With New Facilities, Excited To Be Back With Staff Members appeared first on Raiders Newswire.