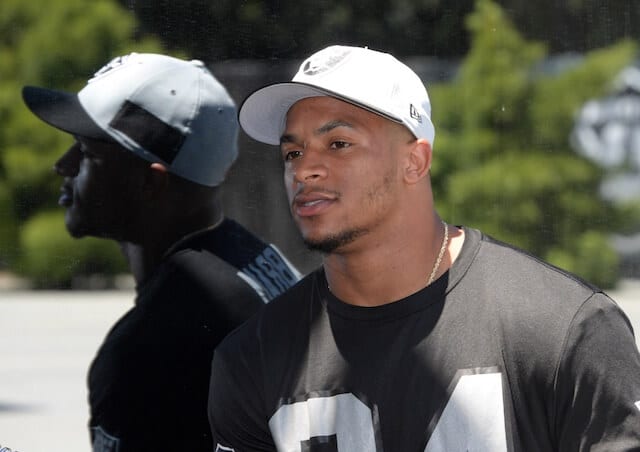 The Las Vegas Raiders’ 2019 rookie class is one of the best in franchise history as they added a handful of impact players on both sides of the ball such as Josh Jacobs, Hunter Renfrow, Alec Ingold, Maxx Crosby, Clelin Ferrell, Trayvon Mullen and Johnathan Abram.

One thing the Raiders’ front office valued going into the draft that year was taking high-character players in order to build the culture that Jon Gruden has been talking about since he re-joined the organization.

In addition to producing on the field, all of the Raiders’ 2019 draftees seem to be really close off it and positively impacting the locker room culture.

The latest example of that was Crosby’s recent interview on The Lefkoe Show when he poked fun at Abram for needing to consistently be muted during virtual team meetings, via Raiders.com:

“John [Abram] can’t stop talking,” Crosby joked. “[Josh Jacobs and John] together, they talk back and forth, they talk a little crap, but John is a different animal. You should see him in meetings, Coach Guenther has to tell him to mute his mic, like three times a meeting.

“He asks a lot of questions, and he’s really smart when it comes to football, that man knows football and what’s going on, but he always asks questions. Randomly in meetings you’ll hear yelling, or whatever, going on and kids running in the background, and Coach Guenther’s like, ‘John, can you please mute your mic.’”

Ever since the Raiders drafted Abram in the first round last year, it has become clear that he is a character and loves to speak his mind.

He has the natural ability on the field to back up whatever he says, although he unfortunately did not get to prove that in 2019 after going down with a season-ending shoulder injury in his first career game.

All reports on Abram’s shoulder this offseason have been positive as he gets ready to get back on the field in 2020. The Raiders’ secondary struggled in a big way without him last season, so hopefully he can make an immediate impact when he returns to the field on what should be a much-improved team.