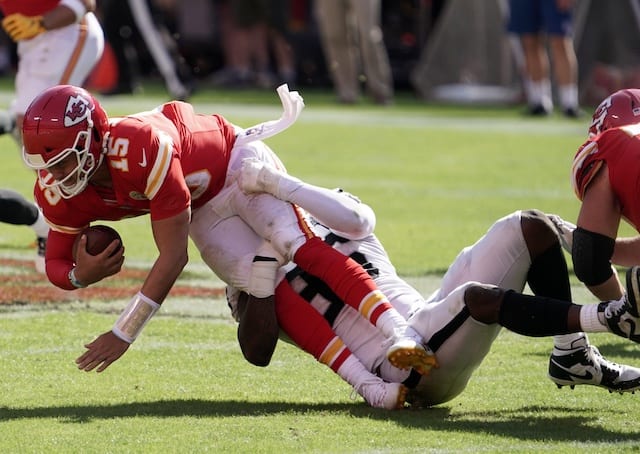 The Las Vegas Raiders pulled off a big upset in Week 5, going on the road and beating the defending Super Bowl Champion Kansas City Chiefs, 40-32, to head into their bye week at 3-2.

This marked the first time in Derek Carr’s career that he beat the Chiefs in Kansas City, and he earned it by throwing for 347 yards and three touchdowns.

While the offense won the game for the Raiders, the defense was also great slowing down Patrick Mahomes and the high-powered Chiefs offense, limiting them to just eight points in the second half, which came late in the fourth quarter.

The Raiders’ pass rush has been non-existent at times, but they showed up this week with three sacks of Mahomes, also forcing him to a season-low 51% completion percentage.

Raiders defensive end Maxx Crosby, who had a sack of his own, credited his teammates for their stellar defensive performance, via Levi Edwards of Raiders.com:

“It’s every one of us out there,” said Maxx Crosby regarding the success of the defense. “As a defense we know that Mahomes loves to extend plays, and we had to give everything we had. I know personally I’ve never been that tired.

“We stayed together, we played with confidence and we just cut it loose from start to finish.”

Crosby is proving that his breakout rookie season was no fluke as he is up to four sacks in five games in 2020, including one in each of the last three games.

Hopefully the Week 5 performance is something the Raiders can build on when they come out of the bye week. The difficult part of their schedule is now behind them and they have an impressive 3-2 record, putting them in a position to make a run at the postseason in the second half of the season.

It is clear that the offense is going to do its part, so if the defense can continue to step up the way they did against the Chiefs, who have the best offense in the league, then the Raiders could be in business.

The post Raiders News: Maxx Crosby Credits Defense For Getting Pressure On Patrick Mahomes In Win Over Chiefs appeared first on Raiders Newswire.