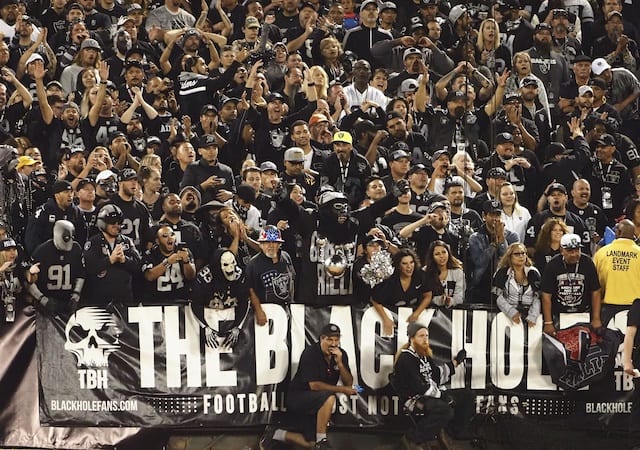 In a recent Zoom meeting amongst NFL owners, it was brought up that the NFL Players Association was requesting the first eight rows of stadiums be tarped over to protect the players with owners having the ability to sell advertisements on those rows instead.

The topic was put to a vote, which went 31-1 in favor of blocking off the first eight rows. The one owner to vote no was Mark Davis of the Las Vegas Raiders.

Davis explained his reasoning to the other owners, not wanting to commit to blocking off rows in the Black Hole yet when it is unknown if fans will be able to attend games, via Vincent Bonsignore of the Las Vegas Review-Journal:

“I can’t imagine telling one fan they cannot attend the opening game of our inaugural season in Las Vegas at the most magnificent stadium that they helped to build. Let alone tell 3,500 fans that their seats are gone for the entire season,” Davis said. “Those seats in the front rows are some of our most ardent fans, including members of the famed Black Hole. You think I want to sell advertising on their seats?”

Davis added that he is doing everything he can to figure out a way to get fans into Allegiant Stadium when the Raiders’ new home opens:

“Creativity will be necessary,” Davis said. “One of our executives came up with a solution, one in which Las Vegas will be familiar. But the league shot it down dismissively. But we’re not ready to give up yet. We will do everything we can to see that all our fans are able to attend every game this season.”

The league is allowing fan attendance based on state and local regulations of each of its 32 teams. Nevada regulations haven’t been as strong as other states with Las Vegas casinos opening in recent weeks. Davis says his talks with the league haven’t gone very far though:

“Unfortunately, a league that operated the entire offseason on the basis of equity, whether it be the draft or team facility access, has completely dropped the ball on uniform attendance procedures,” Davis said. “We have potentially 32 different capacities and seating formations. Where is the equity in that?”

While there is potential to have stadiums host a handful of fans for games, Davis feels it would be best to have no fans if they can’t fill it up:

“Maybe it’s all or none, because I’d hate to have to tell any of our fans they can’t go to some or any Raiders games,” Davis said.

With around a month until the start of training camp, only time will tell where the coronavirus (COVID-19) pandemic goes and if the Raiders will be able to host fans at Allegiant Stadium.

One thing that is for sure though is that Davis will do everything in his power to make it happen if it is safe enough.