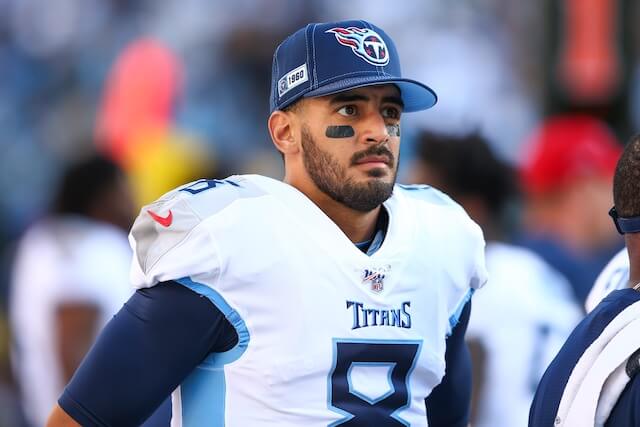 Despite the coronavirus (COVID-19) pandemic forcing people to remain home, this offseason has still been a busy one for the Las Vegas Raiders.

Not only have the Raiders completed their move from Oakland to the desert, but they also have made a number of roster changes in hopes of getting back into postseason contention in 2020.

One addition they made was bringing in quarterback Marcus Mariota on a two-year deal to back up Derek Carr. Mariota is a former No. 2 overall pick out of Oregon that didn’t quite see his career pan out with the Tennessee Titans, although there’s still no denying the talent he possessed.

This offseason has also been a busy one for Mariota as he moves cities and learns a brand new playbook. It appears he has also had some personal matters to attend to as he announced that he proposed to his college sweetheart, Kiyomi Cook, via Rob DeMello of KHON News:

Congratulations are in order to Mariota and his new fiancée, who will begin their lives together in Las Vegas for at least the next two years.

By all accounts, Mariota is one of the best people in the league, which is why Carr welcomed him with open arms when he signed with the Raiders. Mariota also stated after he signed that he understands it is Carr’s team and is only there to support him, showing tremendous maturity and a good sign that they can have success together in 2020 and beyond.

The backup quarterback position is something the Raiders have neglected in recent years, and it came back to haunt them in 2016 when they had a playoff-caliber team but were defeated in the Wild Card round after Carr went down with an injury. With Mariota in the organization now though, they are prepared if Carr were to go down again in 2020.