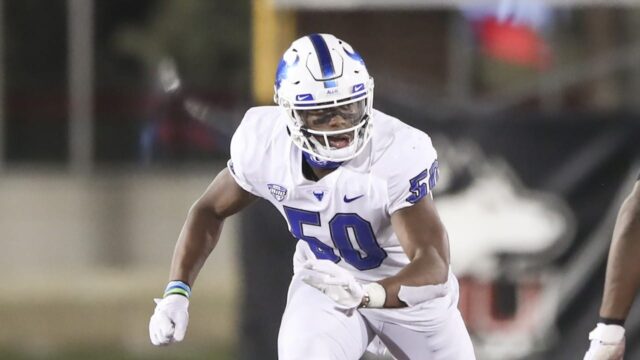 The Las Vegas Raiders added another piece to their pass rush by taking Buffalo linebacker Malcolm Koonce in the third round of the 2021 NFL Draft.

Koonce finds himself in an ideal situation joining a group with edge rushers such as Yannick Ngakoue, Maxx Crosby, and Clelin Ferrell. This will help take some of the pressure off to contribute right away as he continues to hone his craft.

Not only that, Koonce’s skill set could make him an ideal fit under new defensive coordinator Gus Bradley. It appears he is already looking forward to making an immediate impact.

Given the team’s efforts to revamp the pass rush this offseason, it is evident that Bradley will be relying heavily on this rotation to provide consistent pressure. Koonce feels his skill set will allow him to oblige quickly.

“Yes, 100 percent,” Koonce said. “I like to predicate myself and pride myself on making QB’s jobs as hard as possible. So, yeah, I think I can do that immediately.”

Koonce hails from the same alma mater as Chicago Bears linebacker Khalil Mack. While he is certainly doing what he can to mirror Mack’s success, their interactions were few and far between at Buffalo.

“Well, I’m an extreme fan, so I’m a fan of pass rush,” Koonce said. “So, I most definitely watched his film a whole bunch of times. Like personally, I’ve seen him in the building at UB coming and going and stuff like that. Sometimes he was there for our drills, but I wouldn’t say I know him personally.”

Although Koonce does not know Mack on a personal level, he has done a stellar job of following the same path to the NFL. Anything close to the level of production the former Raiders’ star enjoyed would more than justify the pick.

For now, Las Vegas will settle for bolstering this rotation with another quality piece in Koonce. Despite being somewhat undersized for a traditional pass rusher at 6-foot-2, 249 pounds, his burst off the edge could make him an ideal fit in Bradley’s scheme.

Koonce registered 63 tackles, 14 sacks, and three forced fumbles during the last two seasons at Buffalo. He also earned Defensive MVP honors of the Makers Wanted Bahamas Bowl as a junior and is just the 15th player from his alma mater to be drafted.

The Raiders have Ngakoue and Crosby are both under contract for just two years. Drafting Koonce could very well pay some major dividends down the road.