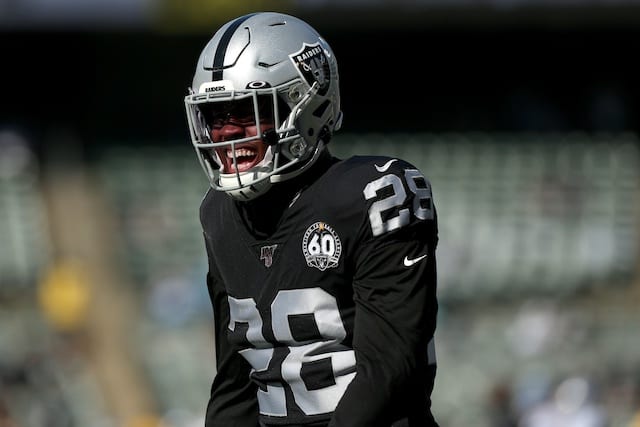 The Las Vegas Raiders struck gold in the 2019 NFL Draft, selecting a number of talented, young players on both sides of the ball.

The best of the bunch is running back Josh Jacobs, who had a Rookie of the Year caliber 2019 season although he lost out of the award to Kyler Murray after missing some games at the end of the season.

Jacobs certainly proved he belonged and was worthy of being a first-round pick though, carrying the ball 242 times for 1,150 yards and seven touchdowns while also hauling in 20 receptions for 166 yards in 13 games.

As he gets set to enter his second NFL season, expectations are as high as ever for Jacobs going into 2020. The Raiders have added more weapons on offense, which should open up the run game, and the hope is that he will also see more touches in the passing game as well.

There is no denying Jacobs’ talent and in a survey conducted by ESPN’s Jeremy Fowler that polled 50 NFL executives, scouts, coaches and players, he was ranked the ninth-best running back in the league.

While Jacobs was only No. 1, one anonymous coach believes he’ll be moving up the list soon:

“He’ll be top-5 soon,” said one coordinator. “Never gets tackled by first guy, smoothness is pretty unique. Really good back.”

Another executive chimed in, revealing what it is that makes Jacobs so special:

“Not elite speed but so tough and balanced overall that he can make big plays happen,” said an NFC exec.

If Jacobs can follow up his impressive rookie season with another strong year in 2020 then there’s no doubt he will be moving up the list and considered one of the bright, young stars in the league.

While his personal success would be great, there’s no doubt that Jacobs’ only goal in 2020 is winning as many games as possible though to help get the Raiders back to the postseason.