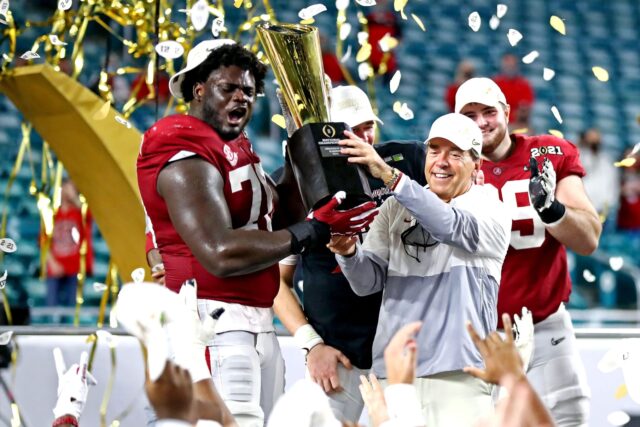 The Las Vegas Raiders have selected Alabama tackle Alex Leatherwood with the No. 17 overall pick in the 2021 NFL Draft.

The Raiders had some notable voids to fill in the secondary and the offensive line following a busy offseason. Head coach Jon Gruden and general manager Mike Mayock opted to address the latter to shore up the protection for quarterback Derek Carr.

The selection was deemed rather premature by ESPN mock drafts that had Leatherwood sliding to the second round. While there were still some notable names on the board, it is evident that he was high on the team’s radar.

Leatherwood replaced Jonah Williams at left tackle for the Crimson Tide after he was taken with the 11th overall pick in the 2019 NFL Draft by the Cincinnati Bengals. Despite drawing interest as a bona fide prospect last year, he opted to stick around to secure a second national championship in four years.

Of course, there was still the matter of filling in the vacancy at right tackle left by Brown’s departure this offseason. Mayock recently shared some heavy praise for the development of Jaryd Jones-Smith and even went so far as to suggest his status as a potential replacement.

The Raiders have now seemingly found their answer with the selection of Leatherwood. Although the bulk of his snaps in college were taken at left tackle, the presence of Kolton Miller indicates that the front office appears to be confident in a transition to the opposite side of the line.

Las Vegas could now look to add a safety when they pick next at No. 48 in the second round or their two third-round picks.