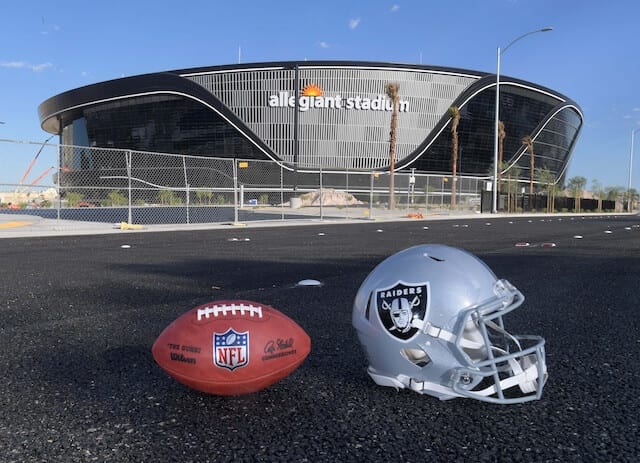 There’s a lot of intrigue surrounding the Raiders as they head into the 2020 NFL season. They’re nearing the end of a multi-year rebuild, culminating in a lavish move to Las Vegas and their new abode, Allegiant Stadium. Jon Gruden is entering his third year with the team, and after the disappointment of his first two seasons with the franchise, the expectations on him in 2020 are exceptionally high. Not least of all, Derek Carr is well and truly under the cosh as the face of the franchise. By all accounts, it’s playoffs or bust for Carr this season.

And yet: the market is somewhat reserved on the Raiders for the upcoming season. When the last three in Oakland produced subpar accounts – 6-10, 4-12 and 7-9 SU records – it’s not surprising to find bookmakers are tipping the Raiders within that range, on a modest 7.5 season win total and with the Under favored at -125.  Moreover, the exact number of wins projected for the Raiders sees the 5 to 9 wins on the season favored at a whopping -190 with various top-notch sportsbooks. Anything higher is deemed a bit of a longshot bet.

The Raiders teased fans with a potential playoff run in 2019 before fritting away the opportunity down the stretch, losing five of their last six games, and playing themselves out of contention to finish with a 7-9 SU record. On one hand, it was a step up from the 4-12 SU finish of the year prior, which marked head coach Jon Gruden’s first term with the Raiders. On the other, it simply wasn’t good enough. Not to mention, the most disappointing way for the Black and Silver to bid adieu to one of the most loyal fanbases in the league and to the city of Oakland – their home since returning to the city in 1995 after briefly departing to Los Angeles.

Although the NFL season is still a couple of months off, the new era essentially kicked off in the offseason with free agency and the NFL draft – the latter of which saw Henry Ruggs III become the first Las Vegas Raiders’ ever draft pick with the No.12 pick. The draft saw the Raiders dip into the pool of talent to seize more offensive flash and pizzazz talent, the multi-dimensional Lynn Bowden Jr. (RB/WR/QB) and receiver Bryan Edwards. They also picked up guard John Simpson, cornerbacks Damon Arnette and Amik Robertson, and LB/S Tanner Muse.

The Ruggs selection is key because it underscores Gruden’s brand of quick and effervescent football – the Alabama Crimson Tide export was the fastest receiver in the 2020 class. Ruggs is a major upside upgrade over every receiver not named Tyrell Williams on the roster and will see a considerable workload, a widely held opinion that is reflected in futures betting, wherein he’s amongst top ten bets to clinch the offensive rookie of the year award. However, if he lives up to the hype remains to be seen. It’s fair to say, his output will depend on how well his quarterback performs.

The offseason was drowned by the noise surrounding Derek Carr and calls for the Raiders to move on from the signal-caller. Six years since the Fresno State quarterback was selected in the second round, the Raiders made the playoffs just once – in 2016 when he led the Raiders to a 12-3 SU record before succumbing to an injury in the final week of the season.

There was an expectation the Raiders might select a quarterback in the 2020 NFL draft, but the virtual extravaganza came and went with the expectation going unrealized. The Raiders did the opposite however by taking care of the quarterback and doing their bit to build talent around him on the offensive side of the ball.

With a new city, a new stadium and new fans on the cards, Carr must put forward his best season if he wants to maintain his position as the team’s starter. On paper, the team stacks up admirably for Carr to have a standout run. Yet for the first time in his career, he has reason to look over his shoulder. While the Raiders didn’t grab a quarterback in the draft, they picked up Tennessee Titans’ cast-off Marcus Mariota – a former No.2 overall draft pick.

Mariota’s demise in Tennessee was propelled by the rise of Ryan Tannehill – another franchise cast-off. Mariota’s resume with the Titans does leave something to be desired, but he’s only 26 years old and still has plenty of years of football ahead of him if the opportunity is right. Who’s to say he won’t enjoy a renaissance if given the chance with the Raiders.

The offseason is a fantastical place where castles are built in the sky. When the punditocracy, NFL experts and fans debate and analyze old and new talent and how the two might flourish together in the upcoming season. These are heady times for the Raiders. Which way they go – up or down – rests heavily on what Carr can accomplish with the revamped roster in Las Vegas. Make no mistake about it, the pressure is well and truly on to not only produce a winning season but clinch a playoff spot, if not more. At the crux of it: it’s a must-win season.