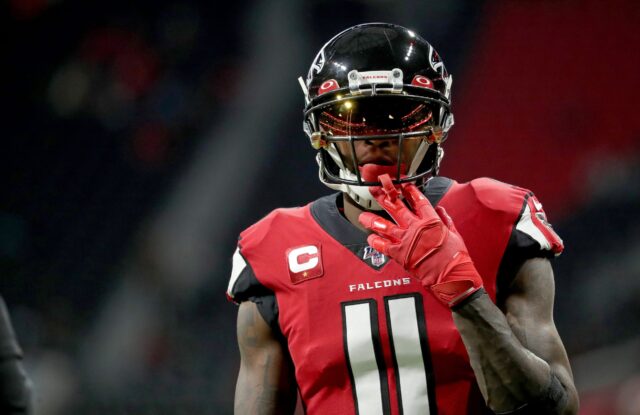 There has been plenty of speculation regarding the Atlanta Falcons plans for wide receiver Julio Jones this offseason. Given the Las Vegas Raiders’ desire to beef things up on offense, it seems that the rumors have not gone unnoticed by the team’s brass.

Although nothing is set in stone at the moment, it appears the Falcons are indeed doing their due diligence on potential deals for Jones. Should they decide to usher in a full-fledged rebuild, it is safe to say that there is no shortage of interest from teams looking to add a seven-time Pro Bowler to their ranks.

Any trade for Jones will not be made before June 1 due to salary cap reasons. Regardless, it appears the sweepstakes has already been narrowed down to a few teams in the eyes of sports bettors.

The Raiders are among those that have emerged as potential frontrunners to acquire Jones’ services leading up to the 2021 NFL season. According to SportsLine, they currently hold the second-best odds to add him behind the Baltimore Ravens.

According to @SportsLine, the Raiders have the second-best odds behind the Ravens to trade for Falcons star Julio Jones:

The prospect of the Raiders landing Jones would undoubtedly provide a major boost to the receiving corps. However, they will face their fair share of competition from other potential contenders looking to do the same.

Any team hoping to strike a deal would presumably be making quite an investment on Jones to make it come to fruition. On top of having to part ways with a package, including either first or second-round picks, they will also be taking on a heavy price tag for the remainder of his contract.

Jones’ deal carries a $23 million cap hit in 2021, and almost a $20 million hit the following two seasons. This is a significant price to pay for a 32-year-old wideout coming off an injury-riddled season.

If the Falcons opt to take a quarterback with the No. 4 overall pick in the 2021 NFL Draft, this would all but confirm that a rebuild is in the works. Even if a healthy Jones is arguably still a top-3 receiver in this league, his team may finally be ready to start from scratch with as many resources possible.