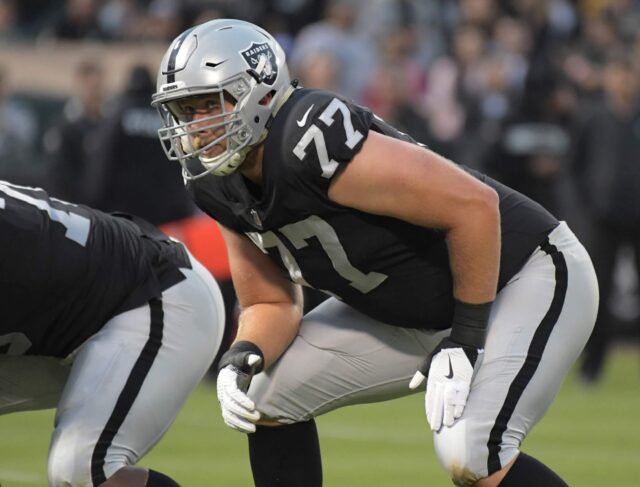 When he was drafted 15th overall by the then-Oakland Raiders in 2018, tackle Kolton Miller represented the first pick made by the Jon Gruden-Mike Mayock regime. After just four seasons in the NFL, Miller finds himself as one of the veterans on the team under new head coach Josh McDaniels.

Miller’s career started off a little questionable after some struggles in his rookie year, especially with injuries, but last season was his best, and he was even selected to the All-AFC team by Pro Football Writers. And now, during the offseason workouts, Miller is embracing his role as an ‘old guy’ via ESPN’s Paul Gutierrez:

“Our job as old guys,” Miller said with a Cheshire cat grin and pointing to his barrel chest, “we’re trying to show them the ropes.”

Despite being just 25 years old, Miller is the longest-tenured Raiders offensive lineman after four years with the franchise. And with the team drafting Alex Leatherwood in the first round last season and Dylan Parham in the third round this season, Miller has undoubtedly had to take on a leadership role.

But he also understands that there is still much for him to learn as well as the group as a whole, and he is working hard to continue to improve:

“It goes by quick. But I’m still trying to compete and learn and pick up something each day. There’s always something to work on. And I think that’s spread out across the room. We’re still young, and we’re trying to improve in as many areas as we can. It’s all new — new coach, new system. Trying to get the basics and execute as well as we can.”

There is a lot of excitement surrounding the Raiders’ offense heading into the season with the addition of star receiver Davante Adams, but the biggest question mark offensively is this offensive line. Miller is the anchor of the line at left tackle, but if the group can’t come together, the entire offense will be severely limited.

Last season Derek Carr was sacked 40 times, the fifth most of any quarterback in the league and a number that must be improved upon if the Raiders plan on taking that next step. Miller undoubtedly knows this and will work hard to make sure he and the rest of the Raiders’ offensive line do everything possible to keep Carr upright next year.