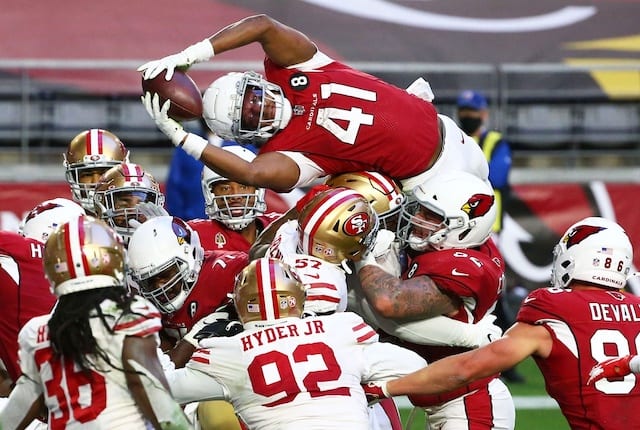 Las Vegas Raiders Kenyan Drake certainly played himself into a big contract following a successful stint with the Arizona Cardinals.

Drake thrived in his role as the top option in Arizona’s backfield for the better part of the last two seasons. This was capped by a career year that saw him finish the 2020 campaign rushing for 955 yards and 10 touchdowns.

Although he received a nice payday by signing a two-year, $14.5 million contract with Las Vegas, Drake is now slated to play second fiddle to workhorse running back Josh Jacobs. Regardless, he does not appear to be too concerned with his role in the offense.

Head coach Jon Gruden noted Drake’s versatility as a major reason for his fit with the Raiders. The latter feels he can thrive as both a change-of-pace runner and viable pass-catcher out of the backfield, via ESPN’s Paul Gutierrez.

“Well, with my abilities, just being a starter … isn’t something that is a high priority, in terms of being out there for however many plays,” Drake said. “What Coach Gruden said [in] how he was going to use me was just being on the field in a multitude of ways — playing receiver, playing running back.

Drake added that he and Jacobs have the potential to develop a lethal one-two punch in Las Vegas.

“Just having the ability to kind of use my versatility as a weapon in the open field is something that really spoke to me. And to kind of share that role with Josh, and him being obviously such a capable back, I feel like it spells success for this team.”

Drake’s comments indicate that serving as the clear-cut, No. 1 option may not have been as important as finding the right fit for the next chapter of his career. Of course, it is safe to say that making lucrative money as the backup certainly did not hurt the decision-making process.

Drake has established himself as a bit of an all-purpose maven throughout his career, starting with the Miami Dolphins. He has averaged 40 catches per season over the last four years, with his best receiving year in 2018 when he hauled in 53 receptions for 477 and five touchdowns.

The Raiders also now have a solid contingency plan behind Jacobs for one of football’s most grueling positions. Taking a little bit of pressure off the latter could reduce some of the wear and tear he has experienced down the stretch in recent years.