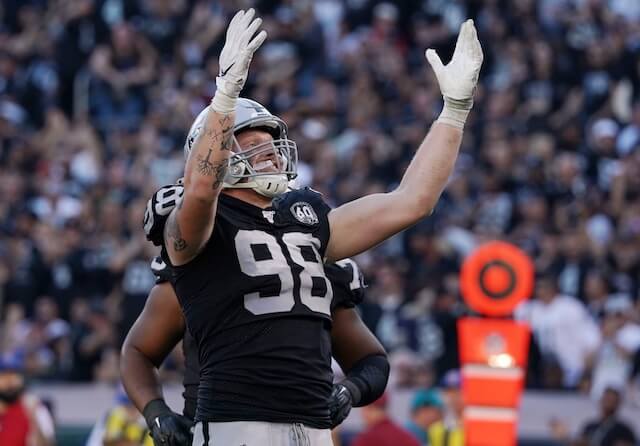 The Las Vegas Raiders struck gold several times over in the 2019 NFL Draft by securing a bevy of young talent on both sides of the ball for the long haul.

The emergence of running back Josh Jacobs as a bonafide workhorse largely dominated the headlines for the Raiders during the 2019 NFL season. However, it was defensive end Maxx Crosby that established himself as the most pleasant surprise in an otherwise disappointing year for the team overall.

Crosby provided the Raiders with plenty of bang for their buck by finishing with 47 tackles, 10.0 sacks, four forced fumbles, and four pass deflections. As a result, the former fourth-round pick even became a dark horse candidate for the NFL Defensive Rookie of the Year award.

According to Scott Bair of NBC Sports, Crosby admittedly has not had much time to take it all in just yet:

“Everything has happened so fast that I haven’t really had time to sit back and think about things,” Crosby said. “For me, this is what I was born to do. I love playing football. There’s nothing else. I really didn’t have a Plan B. I put all my eggs in one basket. That’s just the truth. I’m doing what I’m supposed to do.

I’m having so much fun. Just having my name in the conversation for Rookie of the Year is all that matters to me.”

Crosby added that he was happy to show that his skill set could translate to the NFL despite not beginning the year as a starter:

“As a defensive end, you want to reach double digits,” Crosby said. “Getting to that level as a rookie was super special to me. I came in as the third-string defensive end, a situational guy who can’t stop the run. Playing my position is about more than just sacks. It’s about being disruptive. Everyone can break down the technique and all that, but I just try to make plays.

“That’s what I’ve been doing for a few years in college before entering the NFL. Now I’m doing it in front of more people. That’s what I plan on doing for the rest of my career.”

His comments are certainly understandable considering he has come a long way in such a short amount of time. Fortunately, his motivation as an overlooked prospect has clearly paid huge dividends for his development after essentially outplaying fellow rookie defensive end Clelin Ferrell, who was taken with the No. 4 overall pick.

Crosby has now set the bar quite high for himself moving forward as an integral piece of the Raiders’ edge rush. It is clear that he is adamant about becoming a much more complete player by putting an emphasis on his skills as a run-stopper.

Although he may have come up short for any awards as a rookie, he will be a major part of the Raiders’ long-term plans after they usher in a new era at Allegiant Stadium in the 2020 NFL season.

The post Raiders News: Just To Have Name In Rookie Of The Year Conversation Is ‘All That Matters’ To Maxx Crosby appeared first on Raiders Newswire.