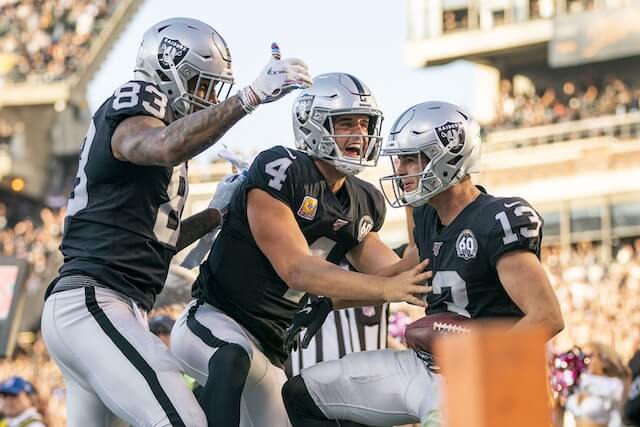 The Las Vegas Raiders have finally seemed to find their stride after a rough start to the season. Josh McDaniels’ team has now won three consecutive games following their 27-20 win over the Los Angeles Chargers, with this streak coming despite missing two of their best offensive weapons in tight end Darren Waller and receiver Hunter Renfrow.

Waller has been dealing with a hamstring issue while Renfrow suffered an oblique injury, and both were placed on injured reserve. Now both are eligible to return to the team, but with a short turnaround for a Thursday game, McDaniels isn’t sure whether the Raiders will do so.

McDaniels spoke about the possibility of activating the pair of Raiders pass catchers, noting that they will talk about it, but it’s a tricky situation because of the short week, via Myles Simmons of Pro Football Talk:

“Yeah, we’re going to talk about that,” head coach Josh McDaniels said of activating the pair. “Obviously, with no practice and those kinds of things, it’s a little bit of a unique situation, I would say. We’re going to have some discussions I think later this morning once we kind of get a handle on where our team is relative to the health of it from yesterday’s game. Just in terms of if there’s anything that needs to happen or is going to happen.

“But it’s a little bit of a tricky situation because bringing guys — like what happened with Nate [Hobbs] a week ago, not having practiced in six weeks and then trying to play a game. You got to be careful a bit and try to make a smart decision, but we’re going to kind of let the health of the team, I’d say, assist us in some of those discussions.”

As McDaniels said, the short week changes things greatly as it limits the Raiders’ ability to practice and be sure that Renfrow and Waller are completely healthy and ready to play. The last thing they want to do is rush them back and potentially lose them for the remainder of the season.

Behind Davante Adams and Josh Jacobs, the Raiders’ offense has been operating at a high level, so there should be no desperation from McDaniels and the Raiders to get Renfrow and Waller back on the field. Things are finally clicking for the Raiders, and they must do everything to maintain that momentum and possibly make a playoff run against all odds.