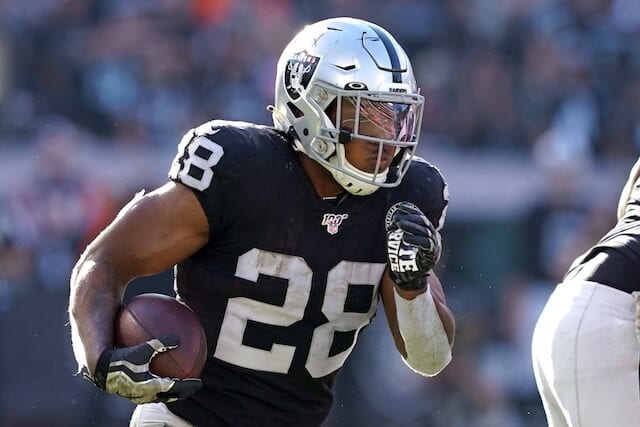 Although the Las Vegas Raiders have generated some hype with their additions to the offense this offseason, there is no question that running back Josh Jacobs will remain as the centerpiece of their approach heading into the 2020 NFL season.

Jacobs immediately emerged as the crown jewel of the Raiders’ trio of first-round picks from the 2019 NFL Draft by establishing himself as a bonafide workhorse in the backfield. He continued to fit the billing after finishing the 2019 campaign with 1,150 yards and seven rushing touchdowns in 13 games.

While there is plenty of speculation regarding how Jacobs stacks up compared to some of the NFL’s elite running backs, it appears his elusiveness has almost become second-to-none after Pro Football Focus ranked him as the second-most elusive runner in the league behind Cleveland Browns’ Nick Chubb:

If this was strictly a 2019 list, Jacobs would occupy the top spot. Chubb got the nod after a second straight season of elite play, but Jacobs’ rookie season was hard to ignore. When it came to missed tackles forced per touch, his mark of 0.30 led the way by a wide margin. Jacobs coupled that with 3.5 yards after contact per rush and 9.6 yards after the catch per reception in limited usage as a receiver out of the backfield. That’s an area where the Raiders should continue to get Jacobs more involved. With Jacobs’ ability to make people miss, the Raiders should look to keep him on the field as much as possible.

Jacobs’ favorable rating should hardly come as any surprise considering just how difficult he was to tackle as a rookie. PFF even pointed out that had Chubb’s larger sample size not been taken into consideration, then the Raiders’ star would have taken the top spot.

Regardless, it is evident that Jacobs’ efforts have not gone unnoticed after displaying his ability to shake off defenders behind an offensive line that was forced to make adjustments due to injury. It is safe to say that Hall of Fame running back Barry Sanders is proud to see a running back making the most out of his touches, despite any circumstances.

The Raiders have acknowledged their efforts to address the remaining holes in Jacobs’ game such as becoming a viable receiver out of the backfield. Fortunately, his 9.6 yards after the catch per reception last season indicates that it is only a matter of time before this comes to fruition.

The fact that Las Vegas has also managed to beef up their supporting cast around Jacobs could be just what they need to take some of the pressure from opposing defenses off of him.