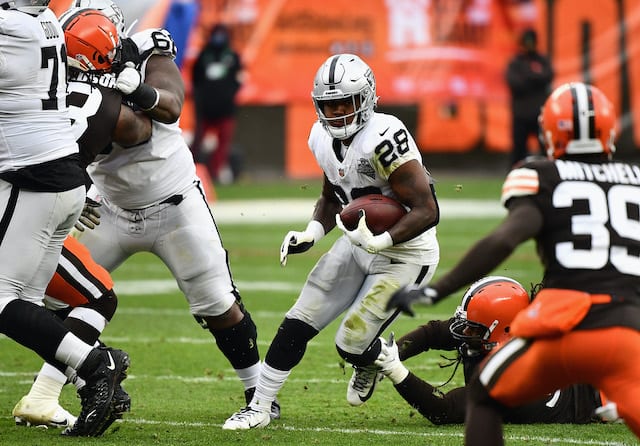 Although it was not pretty, the Las Vegas Raiders were able to get back on track with their 16-6 win over the Cleveland Browns in Week 8.

Head Coach Jon Gruden and quarterback Derek Carr acknowledged their desire to go with an aggressive downfield approach in their offense in recent weeks. Unfortunately, the windy conditions made it difficult for the passing game to get going.

As a result, the Raiders deferred to a ground attack that featured a heavy dosage of running back Josh Jacobs as the team rushed for a season-high 208 yards on 45 carries

Jacobs was admittedly happy to see the conditions of the game turn to his favor after finishing with 128 yards on 31 carries, per Vic Tafur of The Athletic:

Josh Jacobs said the weather “felt good. When it started raining, that really made it fun, because I knew we were going to keep running.”

While the Raiders may have started going with a more pass-heavy approach in recent weeks, it is clear that Gruden is always willing to revert to a more old-school approach on the ground. This helped pave the way for this team to get back into the win column against a stout Browns team.

Jacobs has struggled to find much running room so far in the 2020 NFL season. Of course, this could be attributed to the constant changes up front along the offensive line. However, he showed that he is still more than capable of serving as the centerpiece of this offense when the conditions are right.

Maintaining a healthy balance on offense certainly helps to take the pressure off both Jacobs and Carr when it comes to carrying the load. Regardless, their success is heavily influenced by whether or not their offensive line can remain healthy and intact for the second half of the season.

The Raiders are now entering a pivotal three-game stretch that features matchups with AFC West opponents each week. The onus will fall on Gruden to determine what the game plan calls for in their attempts to close the gap between the Kansas City Chiefs in the division.